Starting over from scratch (or by scratching) ... Palimpsests

[As always, click on any image to see it enlarged.]

Over the past several years, the work with early palimpsests has gained international attention, especially as scholars and their technical teams have looked to ways to make such recycled manuscripts more useful to other scholars and the public.

Just last month, HMML hosted a lecture by Dr. William Noel (Schoenberg Institute of Manuscript Studies, University of Pennsylvania) on "The Archimedes Palimpsest: Revealing the Secrets of the the World's Greatest Palimpsest."

In August 2011, HMML hosted another lecture on modern techniques for exposing the contents of palimpsests from Mount Sinai, when Mike Phelps (director of the Early Manuscript Electronic Library) visited the Library.

So, what exactly is a palimpsest?  Noted manuscript expert Michelle Brown defines the term as follows:

From the Greek palimpsestos ('scraped again'), a palimpsest is reused writing support material from which the underlying text has been erased (by washing in the case of PAPYRUS and by using PUMICE or other scraping devices in the case of PARCHMENT). Erasure was not always complete and an underlying text can often be read with the assistance of ultraviolet light.  (from her complete glossary on illuminated manuscripts at the British Library website: http://www.bl.uk/catalogues/illuminatedmanuscripts/glossary.asp)

Thus, a palimpsest is a re-used piece of parchment on which some an earlier text has been scraped away to make room for a new one.  The Latin term is revealing in a slightly different way, focusing on the "re-written" aspect (rescriptus), rather than the activity of scraping. We generally hear of these manuscripts when the underlying (or older) text is something that has not come down to us in other copies, such as the Archimedes palimpsest and the famous Cicero, De Re Publica palimpsest (Vat. Lat. 5757 from the Vatican Library), discovered nearly 200 years ago.


HMML staff was delighted to learn recently that an uncataloged manuscript fragment (8 parchment leaves) appears to be just such a palimpsest, although of a decidedly more modest character than the Archimedes or Cicero manuscripts. The newer text, possibly of 18th or 19th century origin, was noticed during the process of inventorying some later manuscript fragments, pamphlets, and broadsides. 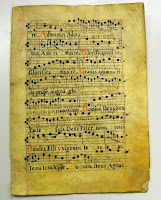 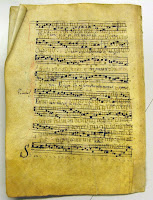 The remains of binding along the edge point to sheets from a book that was disbound and re-used. The pages are well-worn and have numerous repairs (especially along the bottom edge).  A later hand has numbered the pages (not the leaves) as follows: 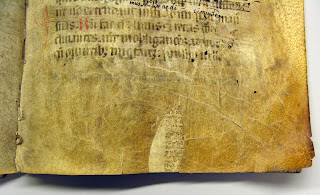 Note that the versos of the leaves have odd numbers and the rectos have even numbers, due to the omission of a number on the first page. So, it is possible that another bifolium, containing pages 4-5 and 10-11 is still on our shelves somewhere.  From an initial glance at the leaves, I would guess that the underlying text is late medieval, and that the size of the leaves--together with the signs of heavy use--point to a liturgical text. Indeed, the upper text is also liturgical and largely music.  The upper text is in several hands, indicating a pattern (and possibly longer period) of re-use.

At face value, it would appear that someone or some community decided in the 18th or 19th century that the need for updating their liturgical repertoire was more important than saving the past.  If that is the case, then this person (or persons) decided to scrape off the text, music and decoration from the parchment and start over.

It is also possible that someone undertook this "palimpsesting" to demonstrate what a palimpsest looks like.  Since we have only just identified these leaves, it is still too soon to say for certain.

In either case, this collection does offer a great opportunity to show students exactly what a palimpsest (albeit a coarsely prepared one) looks like and to talk about the activity of making books in the Middle Ages and the Early Modern world.

As such, it will now join our other samples of what people do with books over time, such as the antiphonal leaves in glass frames, the 19th-century scrapbook of medieval manuscript initials, book bindings, and (of course) our "lampshade" prepared from antiphonal leaves.  I'm sure many institutions have similar collections of manuscript "oddities," and I would love to hear about them!


Let's keep seeking history out there--even in the wrong (or hidden) places!

Peace.
Posted by Matthew Heintzelman at 7:13 AM