With a raven for a friend; or, Benedict(ines) and Books, part 4 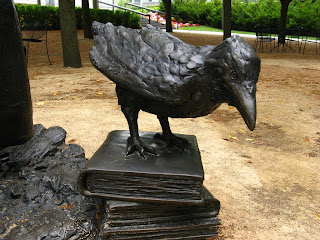 Since first coming to work at the Hill Museum & Manuscript Library (Saint John's University) eleven years ago, I have been constantly impressed by the Benedictine community and the individuals who make up that community.

Yesterday (July 11, 2012), on the feast of Saint Benedict, his modern-day followers reminded me once again of the great gift they bring to all of us.  Indeed, I have used this space previously to comment on the role the Benedictines have played through the centuries in the life of the book, often relying on pictures from older books.  This is again the subject of today's musings.

One of the monks celebrating a major anniversary yesterday was Brother David Paul Lange, OSB, who began his journey as a monk 25 years ago.  I got to know David Paul in 2010, when we were among 12 folks selected to go on a Benedictine Heritage Tour in Italy and Germany.  The members of the tour were a wonderfully diverse cross-section of staff (support, administrative and faculty) from across the campus, all of whom shared an interest in the history and tradition of the Benedictines. 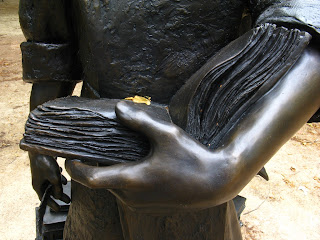 Of course, as a librarian, my head immediately filled with thoughts of books and places (especially those connected the Benedictines) where books could be found. The tour gave me the opportunity to see libraries at the abbeys of Subiaco, Metten and Ottobeuren, as well as a quick visit to the Bavarian State Library (perhaps the largest "monastic" library in the world).

Each of the 12 members of our newfound community made connections in his or her own way with Benedictine traditions during the course of the journey.  I still use my experiences as foundation for presentations I make to classes and other groups about HMML's work and mission.  And I continue to seek depictions of Benedict and his followers holding books, or receiving books, or writing books, or studying books in a library.

But I have digressed ... 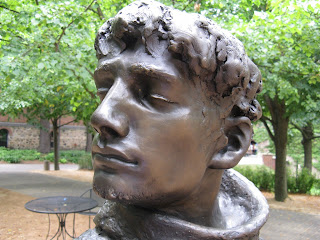 Brother David Paul was my roommate during the tour, and as we got to know each other better, I came to learn much about art and about his work as an artist.  He teaches art at Saint John's University and brings his Benedictine values into all that he does.  This includes pictures of Saints Benedict and Scholastica as young people that he did a couple years ago.  Benedict is holding a book (of course), with a somewhat anachronistic lightbulb hanging behind him.  He looks straight back at the viewer with a bemused, but warm expression (see the picture on "Blogging with the Saints": http://bloggingwiththesaints.blogspot.com/2011/03/passing-of-st-benedict.html).

So, it was a delightful surprise to learn earlier this year that he was working on a statue of a youthful Benedict as a special project. Working with an assistant, he molded a clay model that was later used to make a mold into which molten metal was poured.  The foundry work was done off campus (whew), but the statue came back to campus in early summer and was officially welcomed at a service in the last week of June.  Since I was visiting family at that time, I missed the official unveiling.  Only now have I had the chance to see "Benedict" up close. 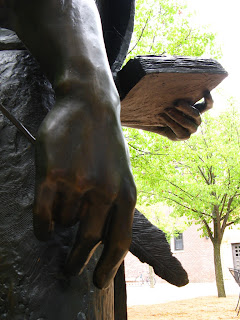 David Paul's Benedict statue continues in that great tradition of connecting Benedictines to books.  The Saint cradles a book in his left arm and holds a quill in his right hand.  He is poised in reflection, almost entranced with the beauty of what he is contemplating. 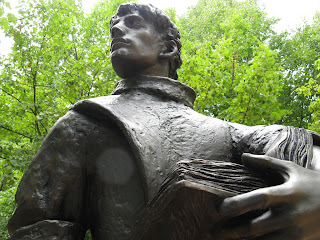 According to Gregory the Great's biography of Benedict, written about 50 years after the Abbot died, the most important book for Benedict was the Bible.  Benedict's most famous work was of course his Rule for monastic communities.  But here we see a young Benedict who is already deeply engaged in the life of the book, as the two stacks behind him attest.  Is he writing a book? Is he reading and taking notes? Are there not the right words to express his thoughts? Are the books in the stacks those that he has read or that he has (literally) written?

What I have until now tried to find in old books and manuscripts--the Benedictine connection to books and knowledge--now stands across the street from HMML in a quiet corner of the campus, an ideal place to curl up with a book and a coffee ....  Hmmm, I wonder if Benedict knew about coffee? 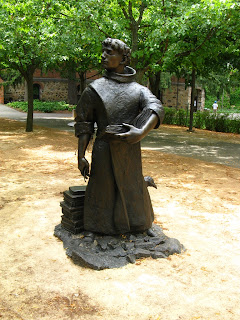