In a couple days I will be attending a pre-conference for the Library Section of the American Benedictine Academy, which is meeting at St. Scholastica Monastery in Duluth, Minnesota. I have been asked to give a short talk on the role of the Benedictines in the change from a predominantly manuscript to predominantly print culture in the 15th and 16th centuries.


Click on any image to enlarge it or view a gallery.

There are many ways that one can find the influence of the Benedictines and Benedictine traditions in the late medieval and early modern world of the book.  On the one hand, the Benedictines supported the new technology by sponsoring books (the Benedictine Psalter of 1459 comes to mind), as well as providing a haven for printers to work--in 1465 the Monastery of Subiaco was the location of the first printing undertaken in Italy and the first German edition of Gregory's Dialogues was printed at the Monastery of Saints Ulrich and Afra in Augsburg (1473).

Another copy of the Rule in the Saint John's Collections (Venice, again by Lucantonio Giunta, 1501) is in Latin and has been combined with the Life of Benedict from the second Dialogue of Gregory, as well as a set of 13th-century meditations on the Rule by Bernard, Abbot of Monte Cassino.  Both the 1501 and the 1505 (as well as the 1544) editions are extremely compact and can easily fit into a shirt pocket.  The earliest printings of the Rule start at about the same time that Venetian printers were developing the small format of books that would become their trademark (so to speak), especially with the work of Aldus Manutius in the early 16th century. 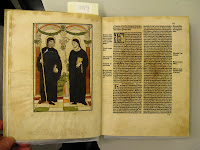 The earliest "printing" of the Rule in the SJU collections dates from 1500, and is actually within a treatise on the Rule of Benedict that incorporates also the texts of the Rule of Augustine and the Franciscan Rule.  This was also printed in Venice by Lucantonio Giunta.  It includes portraits of Benedict and his sister Scholastica (both holding books, of course), as well as a portrait of Benedict with Placid and Maur presenting his Rule to other Benedictines. 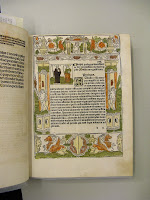 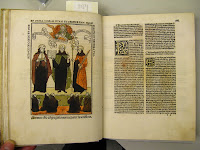 Saint John's does not have copies of the earliest editions of the Rule of Benedict, but there are copies available online at the Bavarian State Library of the editions from 1485/90 in German, 1489/90 in Latin, and 1507 in Latin.  They also have a color digital reproduction of an early 15th-century copy of the Rule from Metten Abbey in Bavaria.  These are all worthy of a look and I will provide a link at the bottom of this posting.

Also of interest is Gregory's Dialogues, which contains the earliest witness to the life of Benedict.  The first edition, available online from our online image service, Vivarium, appeared in Strassburg in 1472.  You can view the entire book at:


However, just like with the Rule of Benedict, the Dialogues very quickly appeared also in vernacular editions, both in German and in Italian, and not long after in French.  Saint John's has a copy of the 1475 Italian edition, as well as a 1509 printing in French.  The latter has a curious portrait of Gregory as its frontispiece.

Most of these works will eventually be added to HMML's online image service, Vivarium.  Right now there are copies of the 1520 Rule of Benedict and the 1472 Dialogues in Latin.  We also have two pictorial biographies of Benedict (from 1587 and 1596) in the online collections.  However, we will soon add complete copies of the 1501, 1505 and 1544 editions of the Rule.  We plan eventually to add further Benedictine works as we can, so keep watching Vivarium for new titles!

Finally, I would like to point readers to the resources of the Bavarian State Library, which maintains a tremendous amount of Benedictine material among its other digital collections.  Along with the copies of the Rule mentioned above, there are also versions of Gregory's Dialogues from 1473 and 1476 (in German), as well as Latin editions from 1477, 1480 and 1496.  There is also a very compact edition of the Vita Benedicti (excerpted from the Dialogues) that was published by Bernardino Benali in 1490.  The web address for the Bavarian State Library digital collections is: