"The monastery here in the heart of a large city is surprisingly quiet, thanks to being ringed by a huge five-storey structure filled with shops, offices and apartments. And it is even somewhat cool, compared to the streets." (Father Oliver Kapsner, OSB; July 19, 1966)

So far, I have been following my path through a number of libraries where the Hill Museum & Manuscript Library (under its earlier name: Monastic Manuscript Microfilm Library) worked in the 1960's. Excursions in December 2013 took me to the libraries at Stift Göttweig, Stift Melk, Stift Klosterneuburg, the Schottenstift, and the Austrian National Library. Today's tour is at the Schottenstift.

When Father Oliver first came to Vienna in July 1966 (after working at the abbeys of Kremsmümster. Lambach, Seitenstetten, Melk, Sankt Florian, Reichersberg, Wilhering, Schlägl, Herzogenburg, and Göttweig), he moved into a room at the Schottenstift, where he and his two associates (Paul Seger and Hans Berger) photographed 439 manuscripts in about a month and a half! Always on the move, Father Oliver and his team continued their work at abbeys in Lilienfeld, Heiligenkreuz, Neukloster (Wiener Neustadt), and Klosterneuburg in the same year.

The Schottenstift collection was by no means the largest of these, but it is a large collection, with many important early manuscripts. The name itself is a misnomer--founded by Irish monks in the 12th century, who later left Vienna in the 15th century. So there never were "Scottish" monks at the abbey, and those monks who were of Celtic origin left long ago! For a cogent explanation of the name, see the Wikipedia article on the Schottenstift.


I visited the Schottenstift on the morning of my third day in Vienna. Since I also had appointments later that day at the Austrian National Library, I needed to be very punctual in my arrival. I was met by Mag. Maximilian Alexander Trofaier, a professionally trained archivist who only fairly recently was put in charge of the manuscript collection. His first duties at the Schottenstift were to administer the archival collections, and only in the past couple years have the manuscripts moved from the aegis of the library to the archives. So, now he administers both. His enthusiasm for the materials was quite infectious and I found our morning tour to pass only too quickly.

Mag. Trofaier also led me to other parts of the collections and I was able to visit the main library hall, which lies entirely within the cloister and thus is not a regular part of tours of the monastery. 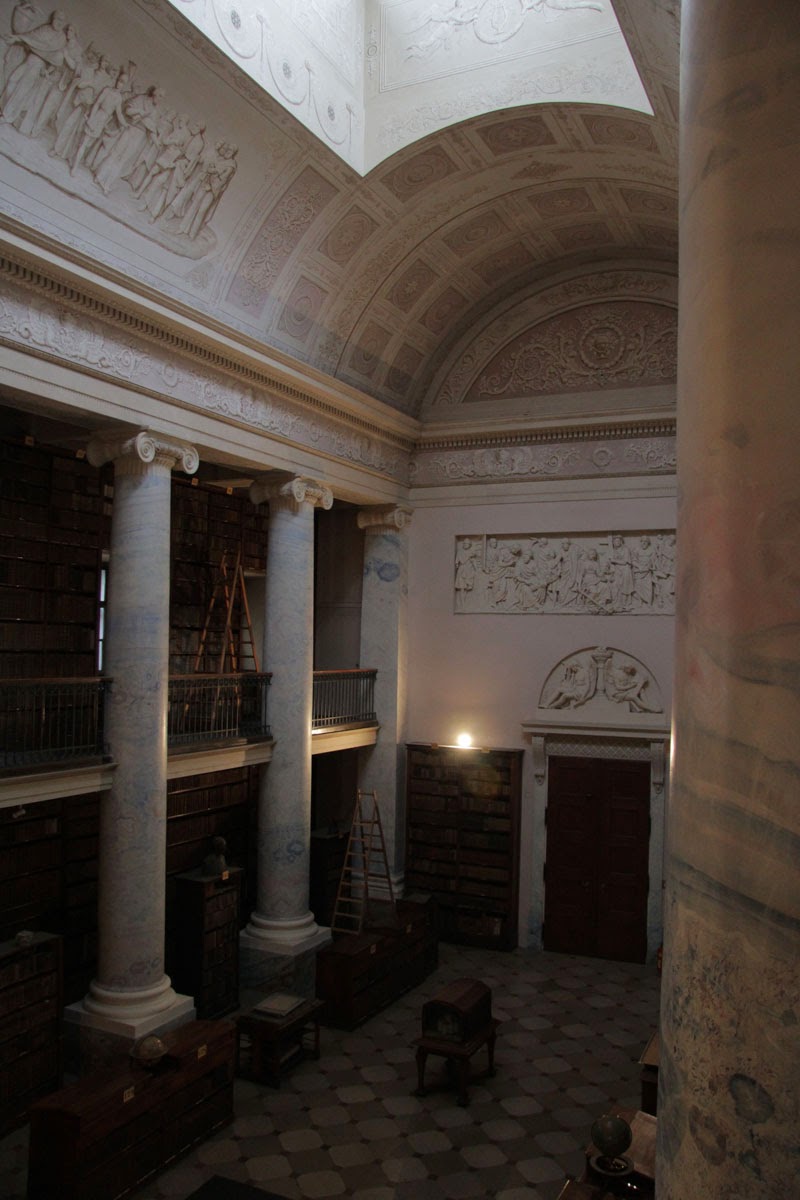 As he explained, this particular monastery underwent a major re-building phase much later than some of the other monasteries in Austria. Stift Göttweig, Stift Klosterneuburg and Stift Melk were radically redesigned and rebuilt in the first half of the 18th century, when Baroque architecture--with its sometimes extravagant decoration--was the dominant artistic style. The Schottenstift, however, is the product of a much more restrained "Classicist" style from the early 19th century. As such, its main hall is designed less to make an impression on visitors than it is to serve the intellectual needs of the monastic community at the Schottenstift.

During the time that Father Oliver was at the Schottenstift, his team passed two noteworthy milestones: more than 4000 manuscripts microfilmed in Austria, and amazingly over one million exposures with manuscript pages. They achieved these totals after only about 1 1/3 years of the project! Of course, the ledger book from those days show that they often worked 50-60 hours in a five-day work week, producing thousands of photographs every week.

Father Oliver must have found the accommodations at the Schottenstift much to his liking. Records show that he returned in 1967 during the project to microfilm manuscripts at the Mechitaristenkongregation in Vienna, and again for several months starting on January 1, 1969, during the microfilming at the Austrian National Library. Eventually, Father Oliver retired as the field director, and a younger monk was found to replace him--Father Urban Steiner, OSB. I close with two photos from 1971, also taken at the Schottenstift, during Father Oliver's final days there.

More pictures from the Schottenstift can be found at the Facebook page for the Austria-Germany Study Center.


Next time--on to the Austrian National Library!

Until then, peace to all!