In this post I bring you an example of one entire prayer/magic scroll from the Saint John's Special Collections. My selection is simply based upon the fact that I have titles for the different sections of the scroll, along with some earlier cataloger's provision of line numbers to help those who are able (and might wish) to read the original text.

I can never look upon (or hold) our library's magic scrolls without seeing in my mind Jacques Mercier's description of the ritual in which the scrolls are produced (Ethiopian Magic Scrolls, 1979, pp.15-16):

"At the end of the consultation, the dabtara may say to the sick woman, 'Your sterility comes from aynä tela (eye of shadow) and from mägana (spirits) who have closed up your womb. You must sacrifice a black sheep, wash yourself in its blood and chyme, and bring me its skin.'" ... "The animal is generally sacrificed on the sick person's land, in a place behind the house where a pit has been dug. The dabtara then has the sheep carried three times in a circle, moving to the right, around the sick person, and then he slits its throat. The blood is collected in a hollow gourd (the sick person must not taste it or the spirit will not leave), along with the chyme. ... Then he washes the person with the contents of the gourd while saying prayers. The evil spirits, attracted by the drink, are drawn off by the liquid as it drains into the pit." [parts of it are eaten by the sick person or relatives] "The scraps and bones will be buried in the pit so that animals will not be able to touch them. The skin will be used for one or more scrolls."

Mercier provides much more detail in his monograph on the significance and origin of the scrolls. Since I have no reason to doubt the veracity of the core of Mercier's description above, I must assume that the scrolls that I am handling were prepared in a similar manner, as part of a ritual and not in a workshop preparing manuscripts. I must admit to being a little squeamish at the image!

Note that the rubrics (red text) in the photos indicate the start of a new prayer or legend. 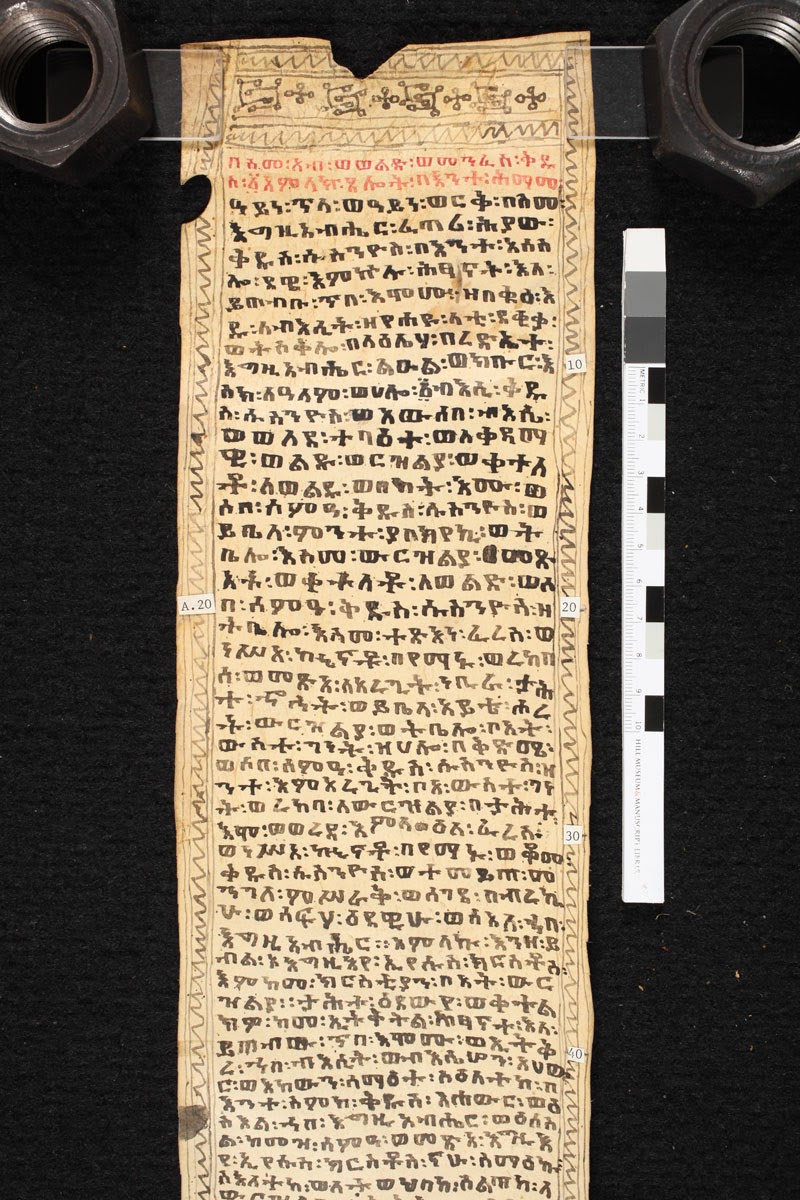 Lines 1-71: The Legend of Suseneyos and Werzeleyā. A prayer against Werzeleyā, the evil spirit which kills suckling children. 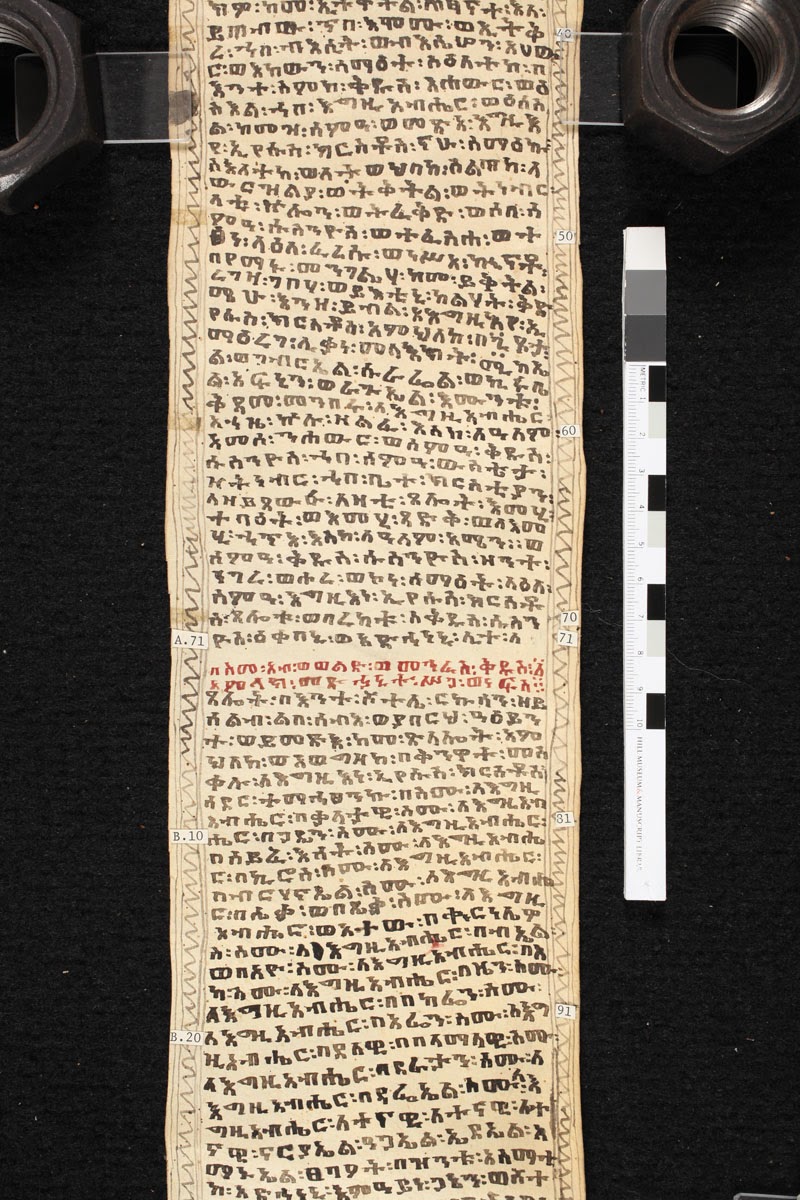 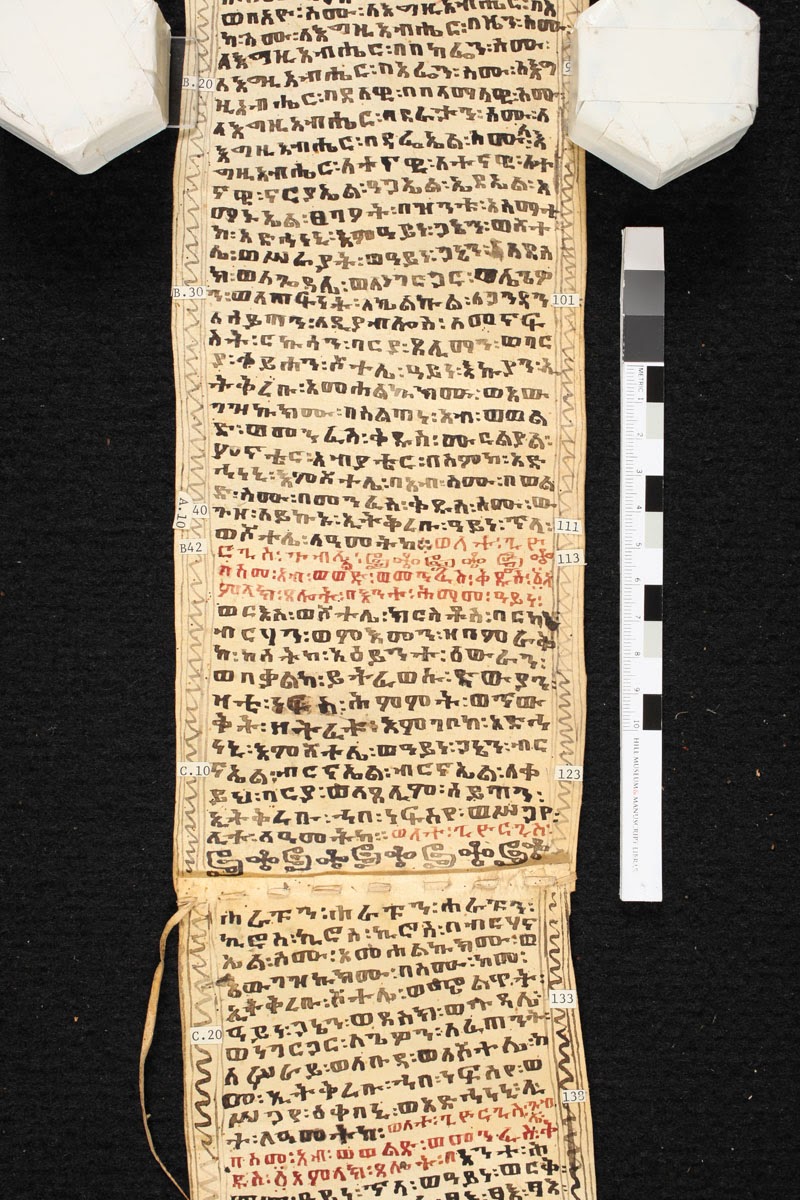 Lines 114-138: Two prayers against evil spirits which cause eye disease and headache.

(Note the stitching to connect two strips of parchment.) 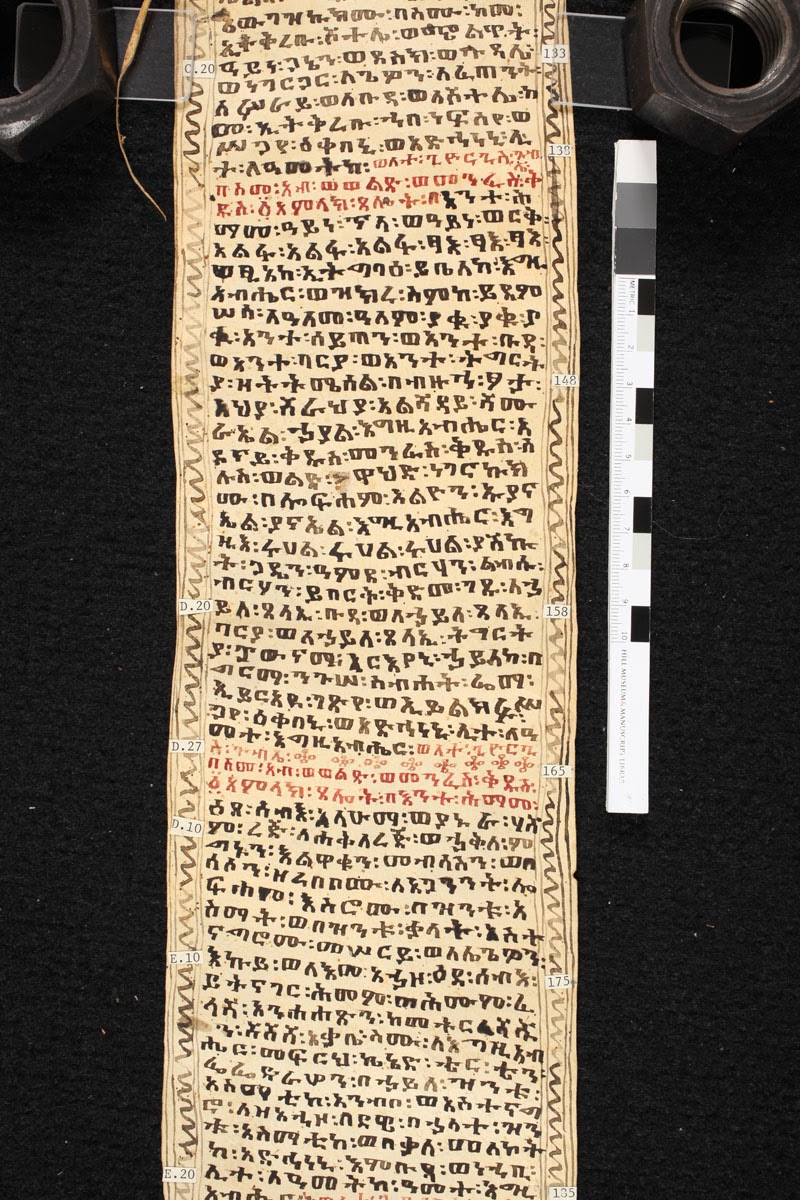 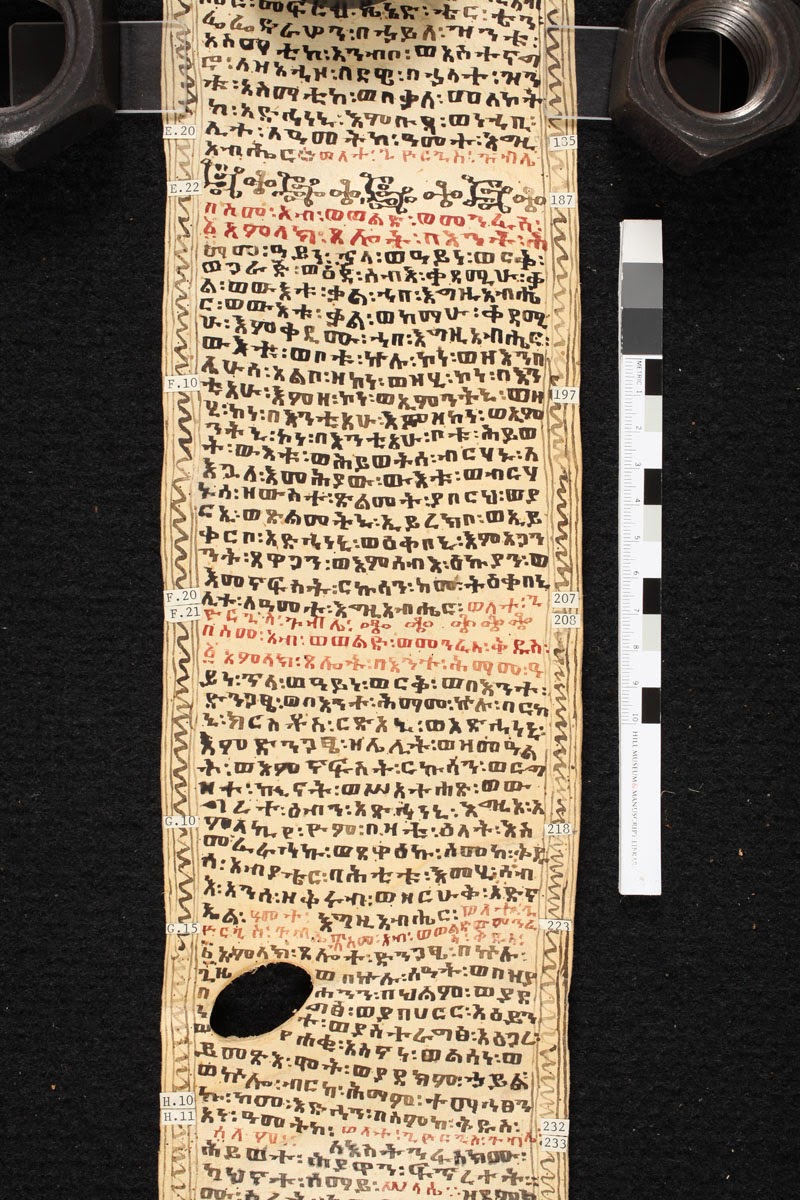 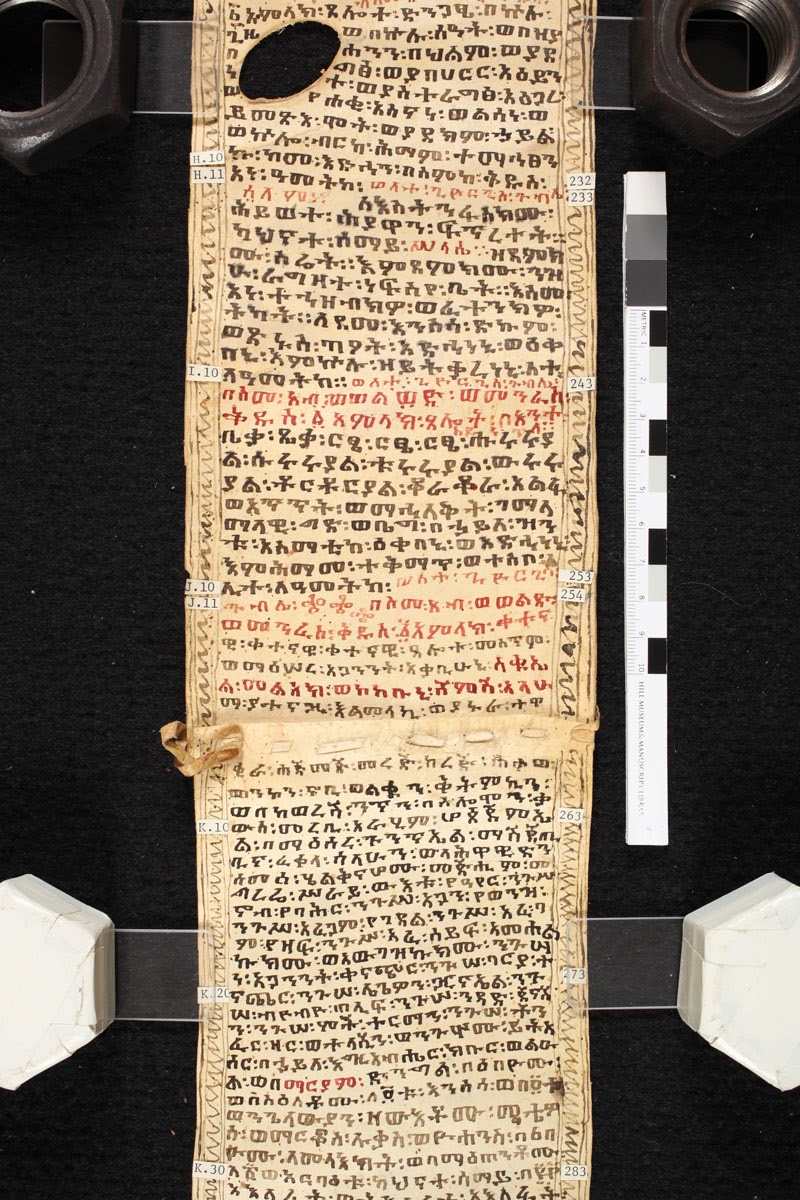 (and another stitch to connect two strips of parchment) 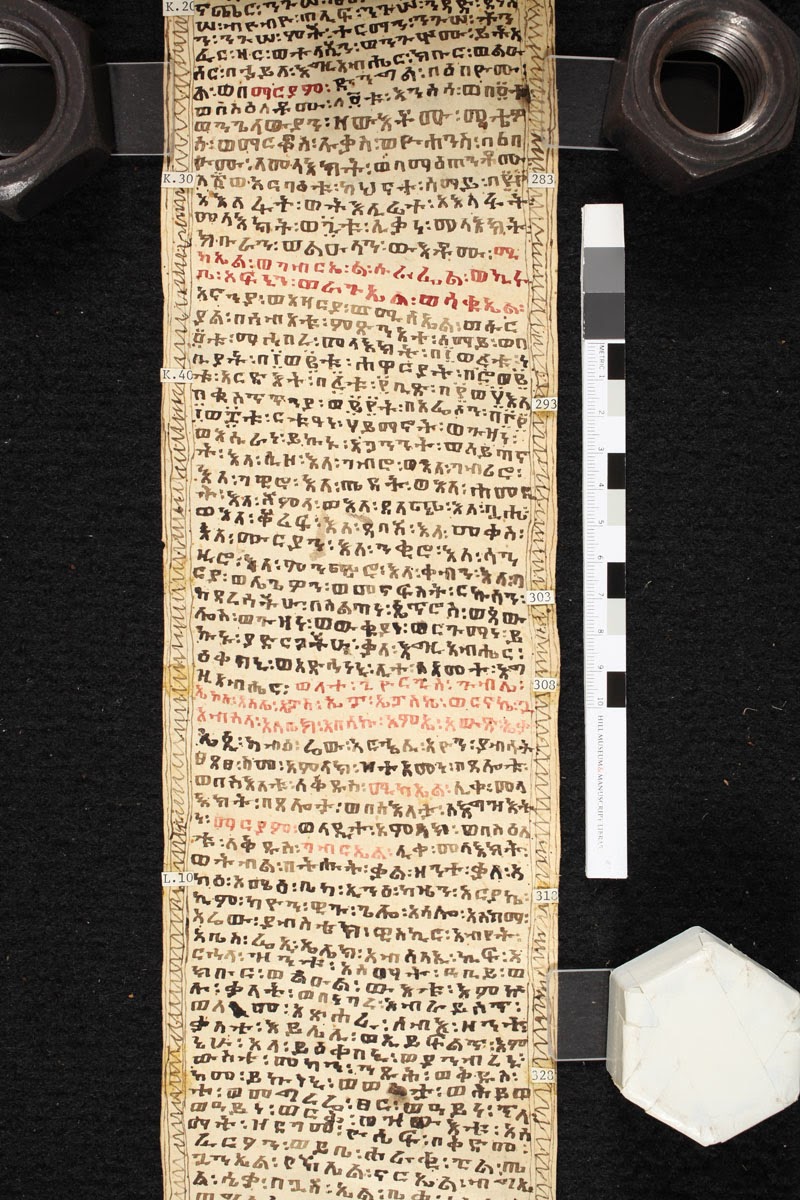 Lines 309-340: Prayer for the protection of the soul. The main body of the prayer is the asmāt of the Archangel Michael found in his dersān. 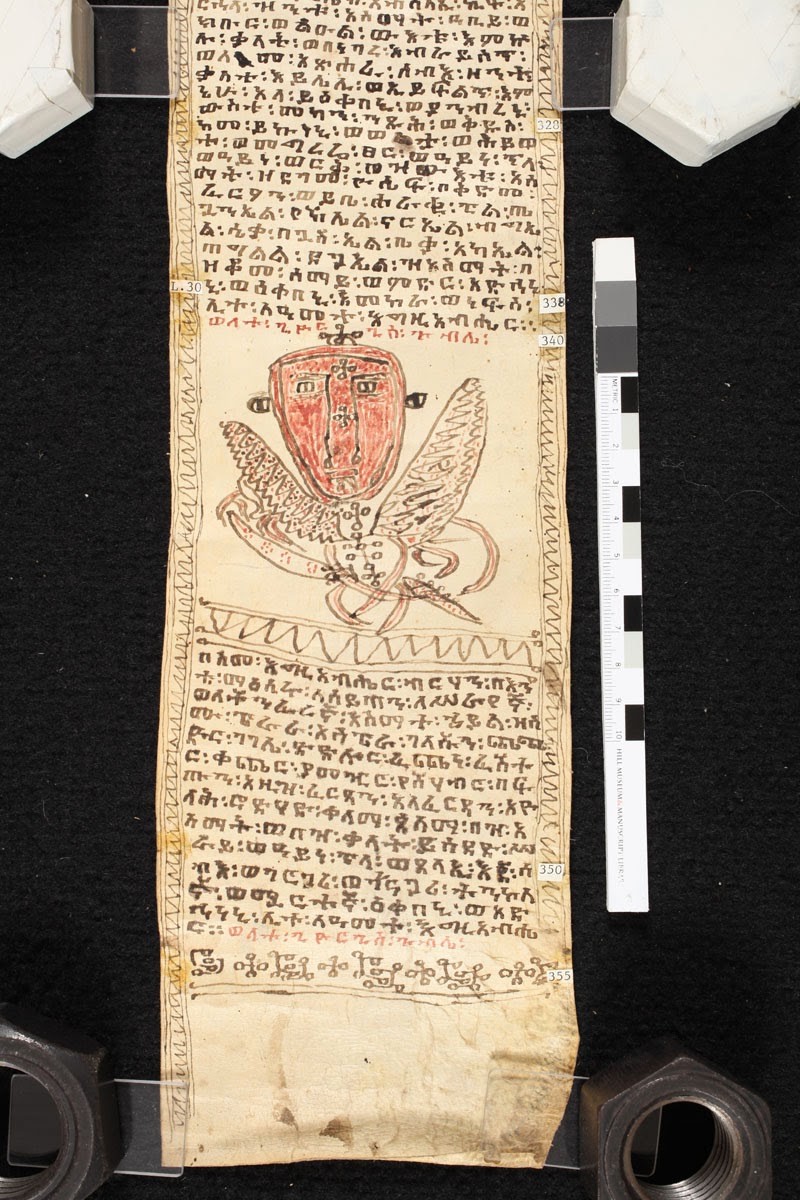 An angel (?) with a big head and two wings, but with no trunk.