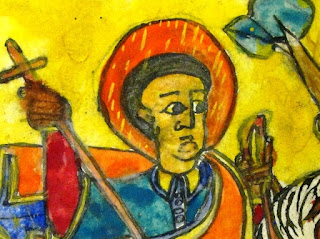 [aside: my apologies for the inconsistent photographs in this posting - the images come from several sources! Clicking on any image will open up a slideshow of the pictures in this posting.]

One of the primary lessons rare book librarians seek to share with visitors is the idea that books exist not only as items of themselves--as a container for text, as a physical artifact, or even as a work of art. A book can be all of these things, but beyond all this, a book is an historical record in itself.  Among my favorite examples in our collection is a facsimile of the Darmstadt Haggadah.  In the true fashion of a book telling a story beyond the text it contains, grease stains in the corners provide an opportunity to show students (and faculty) how books tell the story of storytelling (of Passover), if we only read the signs. But I think I will save that story for another day. 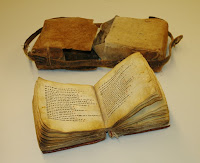 At the same time, through the work of Dr. William Macomber and Dr. Getatchew Haile, HMML became famous for the scholarship dedicated to cataloging these manuscript copies.  Their scholarly work (including a 10-volume catalog of the microfilms) has, in a sense, given the impetus for numerous gifts of Ethiopian manuscripts to the library.  Last year I compiled an inventory of the Ethiopian manuscripts at HMML and found that the library has 30 manuscripts--16 codices and 14 prayer scrolls--spread across three collections. 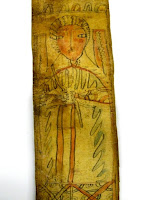 Among the codex manuscripts in the collection is one that is often referred to as "the hairy book" and another "the smoky book."  The latter is a 17th-century Psalter--extremely fragile, with a binding that is completely loose.  We store it in a sturdy clam-shell box.  Officially, this manuscript is known as Franklin H. Williams ms. 1, named after the donor.


My colleagues have gotten into teasing me about the tagline, "Smell this book!"  The line is heard whenever a group of students comes to the library to learn about books, book preservation and book history.  The immediate reaction is always a mixture of curiosity from some, and fear from others--

When someone finally musters up courage to smell the Psalter, they quickly recognize the familiar smell of campfire, or at least a smell similar to that.  I then proceed to explain that in Ethiopia, manuscript culture has remained vibrant, even into the modern era.  Thus, manuscripts continue to be used for prayer, instruction, liturgy, and other aspects of Christian life in Ethiopia.  What does this have to do with smoke?  Well, many places of worship in Ethiopia are in locations that have no electricity and no central heating.  This Psalter has collected the smells of open fire and burning candles over the course of more than three centuries. Its stained pages (and fragile binding) show how heavily it was used for prayer during that time. While this book no longer has a carrying pouch, many of our Ethiopian manuscripts still have pouches for convenient use whenever and wherever the time for prayer occurs. 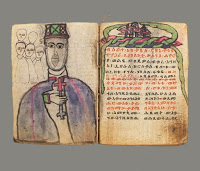 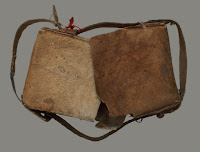 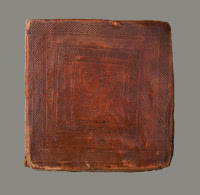 As with the grease stains in the Darmstadt Haggadah, the smoke in Franklin H. Williams Ms. 1 tells a story of the priests who used this manuscript, where it was used, how it was used, and how important it has been to the spiritual life of several people over the centuries. It is a story that, alas, digital images cannot yet impart--only the original manuscript opens up this side of history for us.

Posted by Matthew Heintzelman at 11:17 AM 2 comments: