Benedictines and their Books, part 2

From their very roots in a cave near Subiaco, Italy, Benedictines have been associated with reading and books. While the Rule of Benedict hardly mentions "books" per se, it does demand a great deal of reading in Benedictine communities. This was true even when they moved out here to Central Minnesota.  Not only did the transplanted Bavarian monks bring books with them, but they also actively made books themselves, especially as novices. 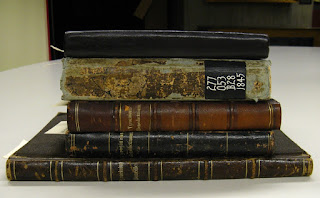 Saint John's has several manuscript copies of the Tyrocinium Benedictinum, a guide book and introduction to Benedictine life for monastic novices.  Each volume has a streamer in it with the name of the monk who copied the book and the year in which it was copied--the earliest is from 1845 and the last from the 1880's. In many cases the scribe has indicated that he copied the book during his novitiate at Saint Vincent's Abbey in Pennsylvania, the first Benedictine monastery in the United States.  Many of these novices at Saint Vincent's later came to Saint John's in Central Minnesota.﻿﻿

I sometimes ask visitors to the Hill Museum & Manuscript Library (especially college students) how they choose to be remembered. In face of the rapidly changing modes of communication and storage -- Facebook, Twitter, e-books, etc.--one sometimes wonders whether there will be a clear record of our presence in the future.  The latest technology rarely lasts more than 5 to 10 years.  I then show them one or two of the Tyrocinium copies and explain a little of what they are:  guidebooks to the Benedictine life that were hand-copied (in Latin, i.e., a foreign language!) by teenagers much like themselves, in a time that knew no computers, electric typewriters, photocopiers, scanners, or even ball-point pens!

At first I thought that the reason for copying this book was merely pedagogical--if you copy out a text, you are likely to remember at least parts of it better. Only recently did it strike me that the earliest printed versions of this text first appeared in the 1890's (Latin in 1893 and English in 1996)! Thus, the copies in the Saint John's collections (all of which predate the 1890's) were copied at a time when no printed version existed. These Benedictine novices could not just wander down to the bookstore to buy a study-edition of the Tyrocinium (much less download it into their tablet or e-book reader), they had no recourse but to make their own copy!

The novices were allowed to decorate their own copy in an appropriate manner.  Here are some examples from the copy made by Alexius Hoffmann, OSB, in 1880 (when he was 17 years old). Hoffmann would later become prominent as the historian of Saint John's University and Abbey, as well as the author of a guide to student life at Saint John's that was frequently reprinted. 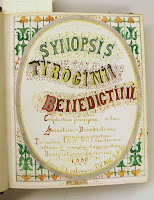 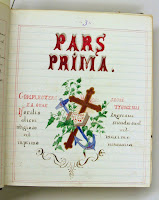 Indeed, most of the copies of the Tyrocinium are not so well-decorated, and the handwriting is often rather inelegant (to say the least), but even with these, the centuries-old tradition of copying (and correcting) a text is consistently applied.

The monks copied other books, as well. One quick example is a Vesperale (or songbook for vespers) that was copied in 1864-1865 by Alexius Edelbrock, OSB, who later became the second abbot of Saint John's Abbey.

As crude as the copying is, it provided a means for Frater Alexius to participate in the prayer life of the community. He would have been about 19-20 years old when he was copying this book out. Note that the lines on the paper are perpendicular to the music and text.

So, manuscript culture continued in the monastery up to the end of the 19th-century.  Reading (and Benedict instructed his followers to read) required books, books that were not always readily available.  As part of a life dedicated to prayer and work, the copying of books combined both sides of Benedictine life--prayerful reading tied to prayerful work.

Oh, by the way, the Hill Museum & Manuscript Library will soon put copies of the Latin and the English printed versions of the Tyrocinium Benedictinum in its online image collection, Vivarium (www.hmml.org/vivarium) as part of a growing set of Benedictine works, including early copies of the Rule of Benedict, pictorial lives of Benedict and other Benedictine saints, etc.  Perhaps some enterprising youth out there will take the opportunity to copy the Tyrocinium from there?


Posted by Matthew Heintzelman at 10:11 AM 2 comments: