Beginnings of a Collection; or, Starting at Number One

﻿
﻿(This article originally appeared in a predecessor blog on the HMML website. I am reproducing it here for those who may have missed it the first time it appeared in 2009.)

In 1875, Father Bernard Locnickar, O.S.B., began a handwritten record of the books in the Abbey library at what is today Saint John’s Abbey and Saint John’s University. First among the books recorded was a 1572 copy of the Bible, translated into German by Johann Dietenberger (Zu Cöln / Durch Gerwinum Calenium und die Erben etwan Johan Quentels / Im Jar M.D.LXXII.). Father Bernard’s 1875 “catalog” provides a snapshot of an already existing collection about whose earliest history very little is known. 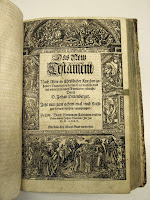 While it seems unthinkable that the monks travelling to Central Minnesota in 1856 would not have brought at least one Bible, a copy of the Rule of Benedict and liturgical books like missals and breviaries, there is no record to verify this. Ronald Roloff, O.S.B., in his 1953 history of the Abbey library could only point to early course catalogs and speculate that individual monks probably had personal libraries to use for worship and teaching. Already in 1869 and 1870 there were beginnings of student libraries at Saint John’s, but still no official Abbey or College library.

Thus, Father Bernard’s 1875 record marks the beginnings of a formal library as we understand it. It is a fascinating document in many ways, with sparse entries for the books and (sometimes) maddeningly minimal information on their acquisition. The location of each book is given with a shorthand notation that seems meaningless without the key in the front flyleaf.

The first 75 books recorded were all either Bibles, biblical texts or works about the Bible. Of these, the largest number were in German, Latin, or both. However, there were also Bibles in Hebrew, Greek, and of course, English. Most likely, the Bible chosen to be number one in the catalog had a special significance for the monastic community at Saint John’s, but that story seems to have disappeared over the decades. Other topics in the earliest books collected include homiletics, catechisms, moral and dogmatic theology, and apologetics. Many of these books form the core of the Special Collections at Saint John’s today.

The 1572 edition of Dietenberger’s Bible translation is a good example. It was originally published in 1534 as a Catholic response to Martin Luther’s complete Bible translation which appeared that same year. The Saint John’s copy is from the 8th edition and features woodcut decorations on the title pages for both the Old and New Testament. The woodcuts feature the Holy Trinity at the top, as well as the four Evangelists along the sides and the twelve apostles at the bottom. The volume includes several woodcuts and historiated initials.

What is most touching about this Bible, however, is that it is not in pristine condition! Many pages are damaged around the edges, some are water-stained, some pages are loose. The binding is very plain and worn. But all the damage bespeaks a volume that at one time was used heavily and not set aside as an untouchable jewel. Books have always been central to the spiritual life of the Benedictines, and this book—printed in 1572 in Germany and lovingly recorded in 1875 in Minnesota—appears to have earned its honorary title of number one (“Nro: 1”).

Posted by Matthew Heintzelman at 2:23 PM No comments: