A Marriage of Sorts

Every so often, one gets the opportunity to try piecing together a puzzle or two.  This week I would like to talk a little about the marriage (so to speak) of two sets of an 18th-century title, the Neu-vermehrtes historisch- und geographisches allgemeines Lexicon, by Jacob (Johann?) Christian Iselin (1681-1737).

Back in 2009, I received an e-mail from a member of the Douglas County Friends of the Library (in Alexandria, Minnesota).  The "Friends" had received an anonymous gift of a large book in German that was dated 1728.  They wanted to know what the book was and whether it was of value to anyone.  After an exchange of e-mails, digital photos, etc., I was able to determine that it was volume two (covering entries starting with the letters D through I/J) of the four-volume Lexicon by Iselin.  It was second edition and--like hundreds of volumes in our collections--was bound in blind-stamped pigskin. I suggested that the Friends might want to contact the few American libraries that have this title to see if anyone needed this volume to complete a set.


In February 2012, the Friends contacted me again.  They had not found a home for their errant volume and were curious as to whether HMML (www.hmml.org) would want to purchase the volume for the rare book collections at Saint John's.  My initial reaction was one of uncertainty--one volume from a multi-volume dictionary or encyclopedia is generally not of great value to scholars.  I suggested that I look further at online antiquarian dealers to determine a general price range for the Iselin.

While searching for a possible price, I stumbled upon a copy of Iselin's Lexicon for sale that included only volumes 1, 3 and 4.  These volumes were also bound in blind-stamped pigskin.  The immediate hope (and for all librarians, hope springs eternal) was that this was a complete set and that we could somehow re-unite a family.  The chances were already minimal at best, but it became clear that these were different when I matched up the bibliographic records and found that volume two came from the second edition or Auflage (1728), while the other volumes were from the first edition (1726-1727).

The book dealer was Esther Geller, at Elgen Books, located on Long Island, New York.  We corresponded by e-mail and I was able to place an order for the three volumes.  Ms. Geller demonstrated great patience with the bureaucracy at our institution while awaiting payment, but we finally go everything processed and the books came a few days later.  The ownership plates in the three volumes indicated that these were once in the Library of the Protestant Episcopal Divinity School in Philadelphia. 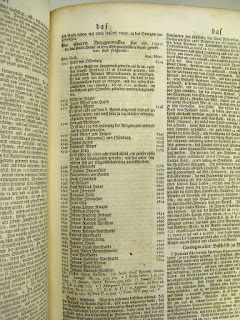 Published in Basel, the editor made sure to include the list of mayors of the city from the late Middle Ages up to the time of the Lexicon. 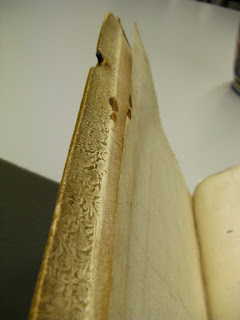 One of the distinctions between the two sets of the titles was the use of bevelled boards on volume 2 (dated 1728).  The boards on the three volumes from 1726-1727 were not bevelled on the edge. 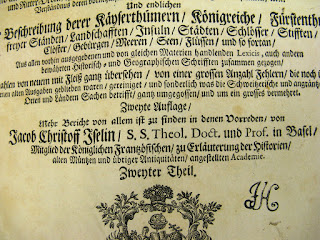 Perhaps the best reward of this exercise lay the new relationships that this book transaction started.  Not only was it a pleasure to work with Esther Geller, but the contact person for the Douglas County Friends of the Library came to visit HMML.  She and her colleague were able to see the Saint John's Bible and have a brief tour of the rare book collections at Saint John's, and even to learn a little about HMML's preservation mission.


So, HMML ended up with a "mixed set" from the first and second editions of Iselin's Lexicon.  While we did not re-unite a family, we did create a new "hybrid" family that can serve future scholars.  The coverage of each volume was the same from one edition to the other, so we have the complete contents.