vHMML and the Joys of a Fragmentary Existence

Manuscripts often come to us in only small scraps of their original form.  Much of the time we find the results lamentable, or at least they prompt us to consider what has been lost.  The most common examples I have for this come from late medieval and early modern antiphonals.  These monster-sized manuscripts (sometimes 2 1/2 feet tall or more) with inch-tall letters served as a center around which a religious community would gather to sing.  Indeed, it is in this context that one wants to try to comprehend the use and importance of such manuscripts.  Antiphonals and other choir books would have been heavily used in the midst of a gathering of a community and in this way are emblematic of the very forces binding such a community together.

Thus, it is sad to see those instances where modern people (including famous art critics) have decided to destroy a book in order to keep only its "art."  For an earlier discussion of this "scrapbooking," see:  http://booksfromthehmmlbasement.blogspot.com/2012/01/scrapbooks-or-scrapping-books-more.html

The most "artistic" of such abuse of manuscripts can be found in HMML's Bean ms. no. 3, a 19th-century example of a book made out of medieval decorated and historiated initials from various sources.  The beauty of the art that was preserved (albeit glued to much later paper stock) belies the lost context from which they have been snatched.  Similarly, antiphonal pages often come to us today individually, perhaps mounted on matte boards or behind glassed-in frames.

A final, and somewhat sadder, example is the instance of the parchment leaves being cut in half, sewn together at the edges to form a semi-square frame, much like one end of a box kite.  Students and visitors to HMML generally recognized immediately the manuscript leaves as having been repurposed into a lampshade.

HMML has several other manuscript fragments, sometimes individual pages of books broken up, sometimes items removed from book bindings.  Today many of these fragments are taking on a new life as tools for manuscript studies.

The Hill Museum & Manuscript Library announced on September 20, 2012, that the Institute for Museum and Library Services had awarded HMML a two-year grant to develop vHMML (or "virtual HMML"), an online suite of tools to enable scholars to undertake manuscript studies in an online environment.  Full information on the project (along with a spiffy new monogram) can be found at the project blog:  http://vhmml.wordpress.com/.

HMML's manuscript fragments, including materials from various times and cultures, languages and scripts, will provide a start for the Folio Collection, a gallery of images for paleography practice and tutorials.

The items in the Folio Collection will be described thoroughly to allow students and those generally interested in reading the scripts will have direct access to their contents.

A leaf of Cicero removed from a book binding.
Note the lines from the cover. (Ms. Frag. 3 (Latin)).


Brief descriptions of these fragments are already available on the Special Collections Wiki for Saint John's University (http://hmmlrarebooks.pbworks.com).  Much of this work of inventorying the collections has happened over the past two years.  Beyond the fragments in the Saint John's and HMML collections, there is also an extensive collection of manuscript fragments in the Arca Artium Collection, with photographs and minimal descriptions in HMML's image database service, Vivarium.  Many of the fragments are in languages other than Latin, providing the opportunity to study different alphabets and scripts. 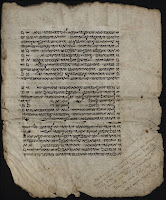 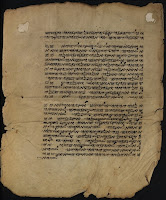 
All of these leaves are taking on a new life as support materials for current and future scholars to develop the necessary skills for undertaking manuscript studies and providing improved access to cultural history stored in handwriting from across the centuries and across the globe.  Through vHMML, the Hill Museum & Manuscript Library (together with its project partners) seeks to support and encourage future manuscript studies.

Eventually, the Folio Collection will include sample images from manuscripts and manuscript fragments at other institutions as well.

Keep an eye out for ongoing developments with (and development of) vHMML and its components!

Posted by Matthew Heintzelman at 6:50 AM