They Shoot Manuscripts, Don't They?

The Hill Museum & Manuscript Library has pursued the preservation of manuscripts through photographic means for over 48 years now. This has always been the primary focus of our work at the library. Starting in April 1965 at Kremsmünster Abbey (Austria), the project microfilmed over 30,000 medieval manuscripts between 1965 and 1972 in Austria. Documenting our preservation work has become easier technologically in recent years (although the flood of information is a problem in itself), but learning about the early years can still be a challenge.

Already in the summer of 1965, Father Oliver Kapsner, OSB (the first field director for the Monastic Manuscript Microfilm Project--now the Hill Museum & Manuscript Library), recorded the stages of microfilming manuscripts. He even supplied captions to explain these stages (used below). These photos and captions provided a means to bring the work closer to the project's supporters in the United States.  As Father Oliver wrote to Mr. Edward R. Vessel, Jr. on August 2, 1965 from Seitenstetten Abbey (Austria):

"Your letter of July 15 reached me at Lambach as we were closing shop there and getting ready to move to the next Benedictine abbey, Seitenstetten. We are here a week now. As soon as we were set up we had pictures taken of the various steps in our procedure, with the steps numbered, as you can see on the enclosed photos."


Here then, is the sequence (what we might call the "workflow") for microfilming in 1965!

1. Father Oliver Kapsner, OSB, selecting a manuscript from the shelves. 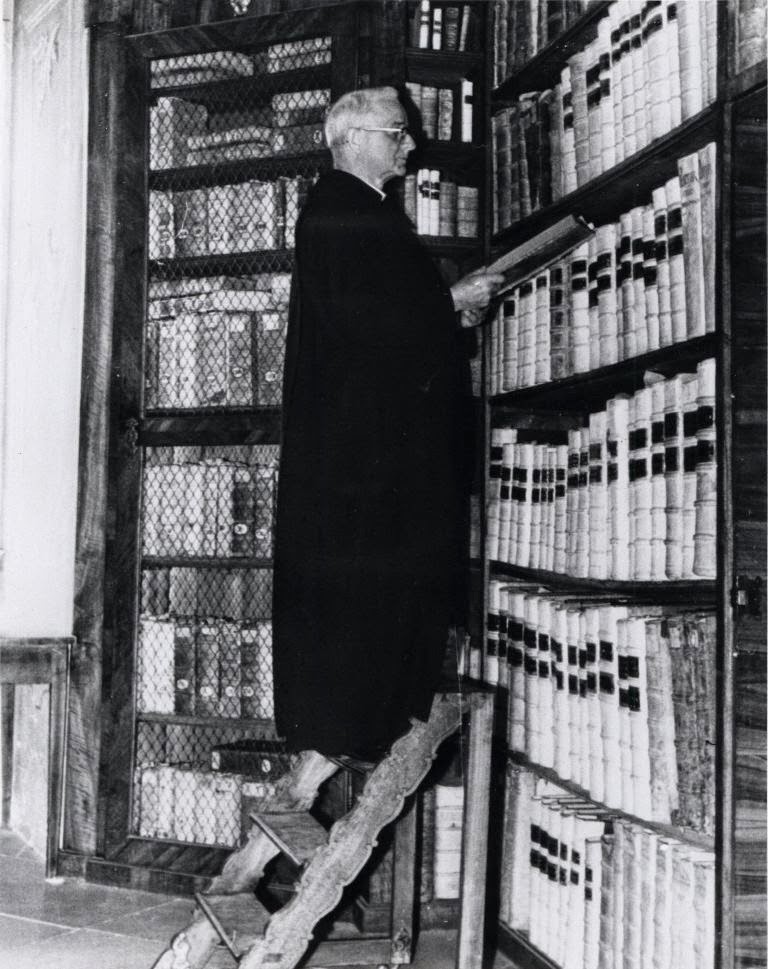 2. Typing up the bibliographical entry. Some of these are very long, several pages, since some bound manuscripts contain as many as forty or more items. 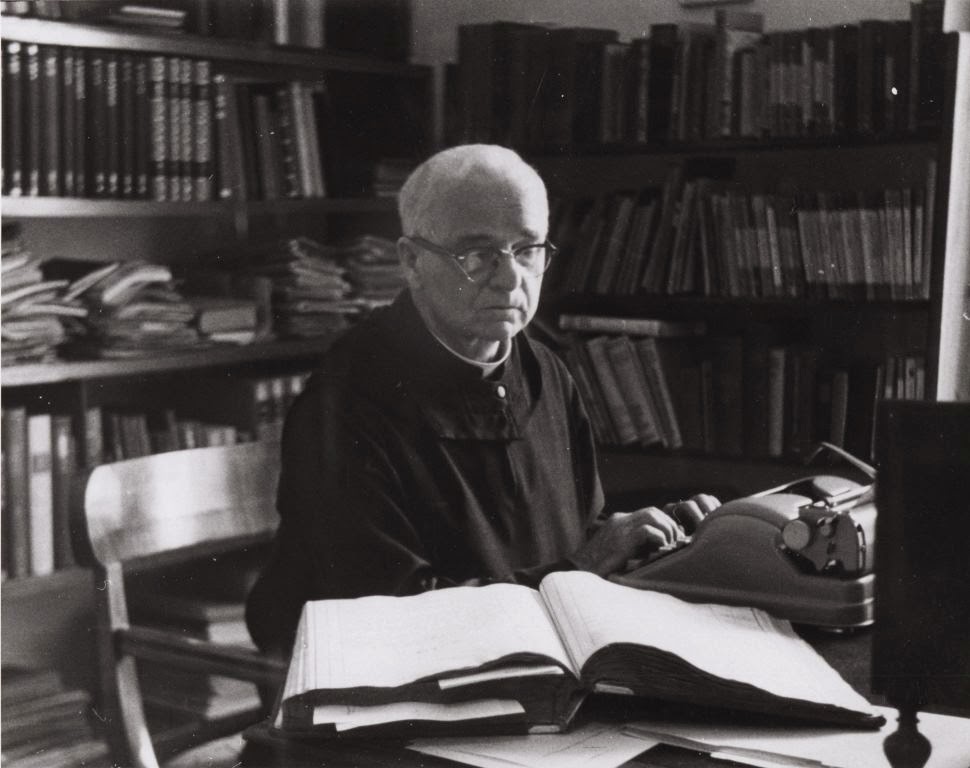 3. Leaving the library (at Seitenstetten, Austria) with an armful of manuscripts. 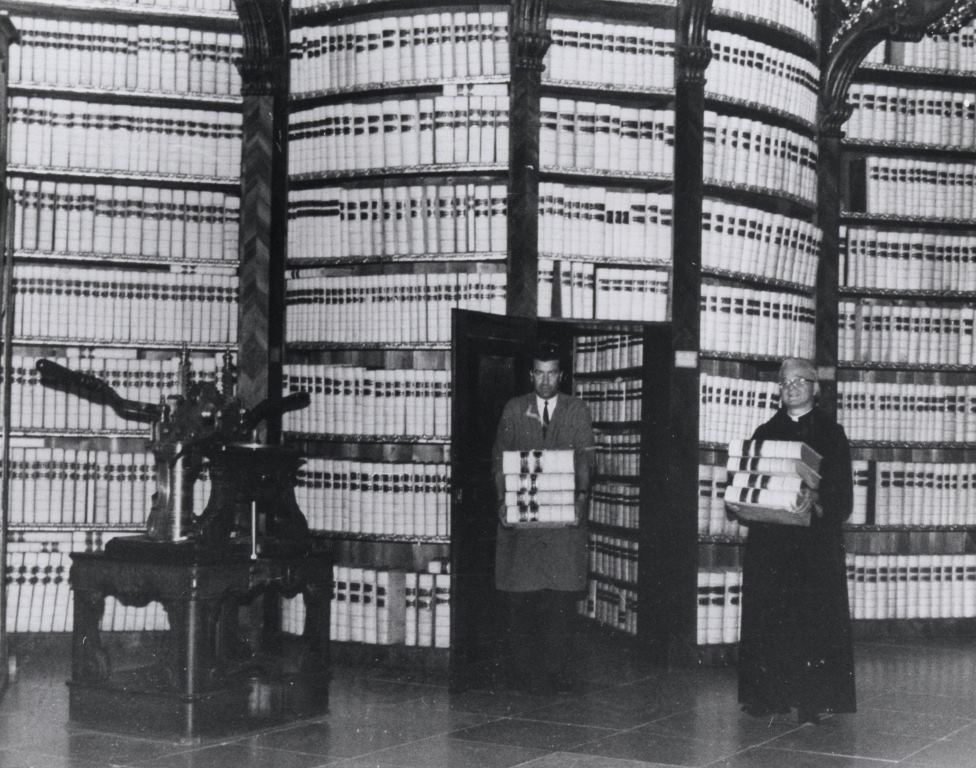 4. Coming down the long monastic corridor with an armful of manuscripts. 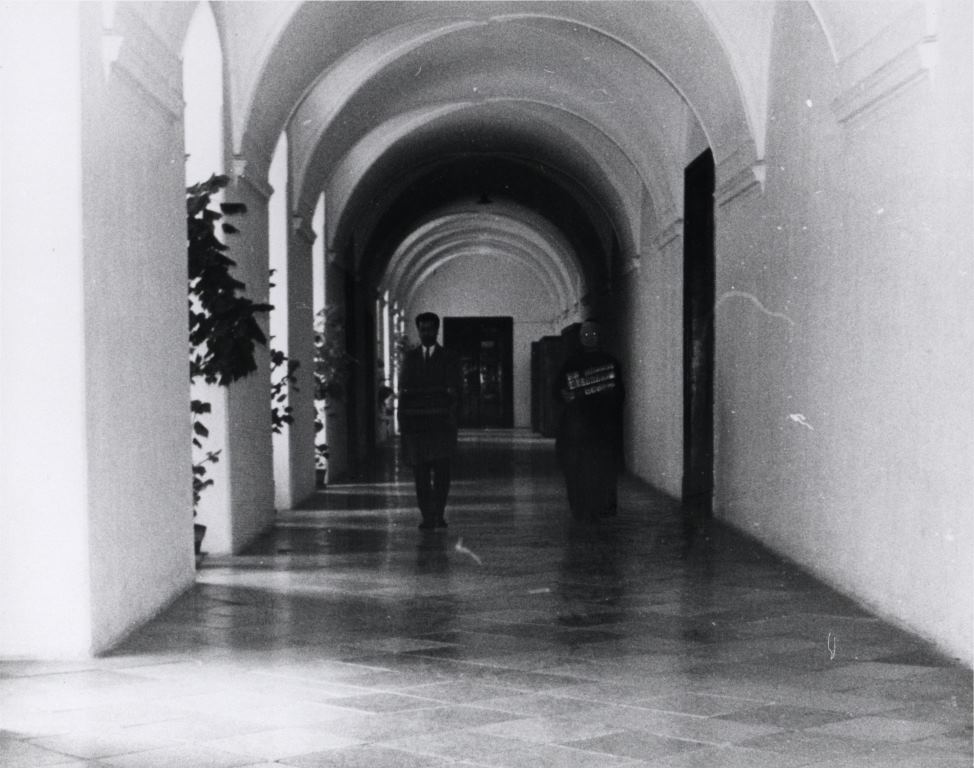 5. Entering the camera room or workroom. 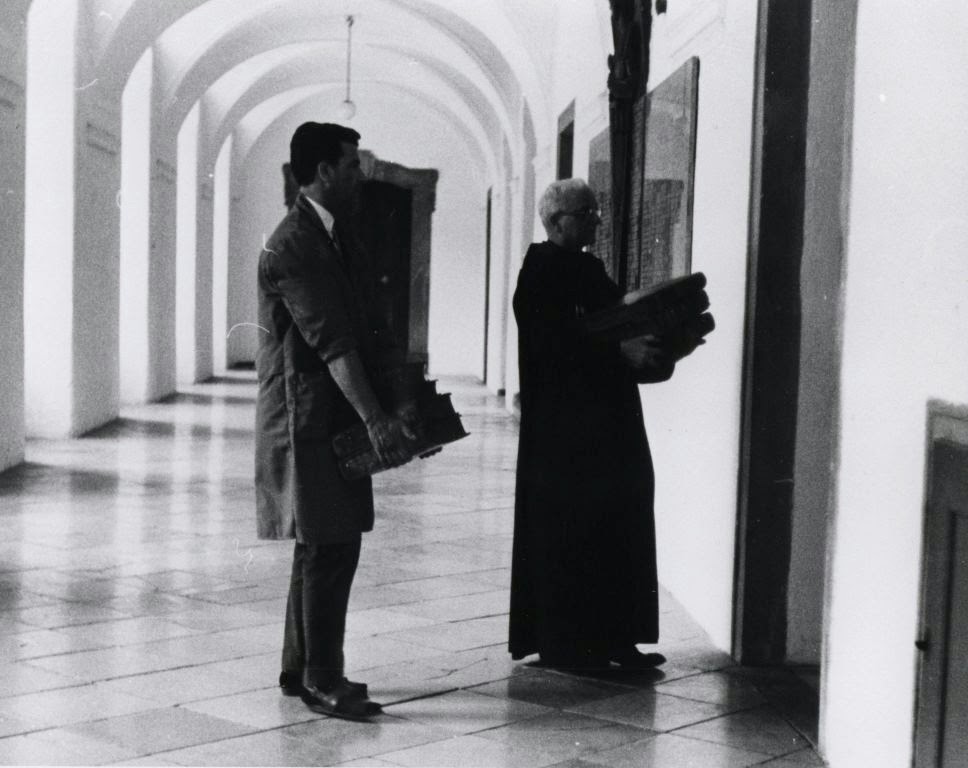 6. Inserting the bibliographic sheet into the proper manuscript. This is also photographed, at the head of the manuscript. 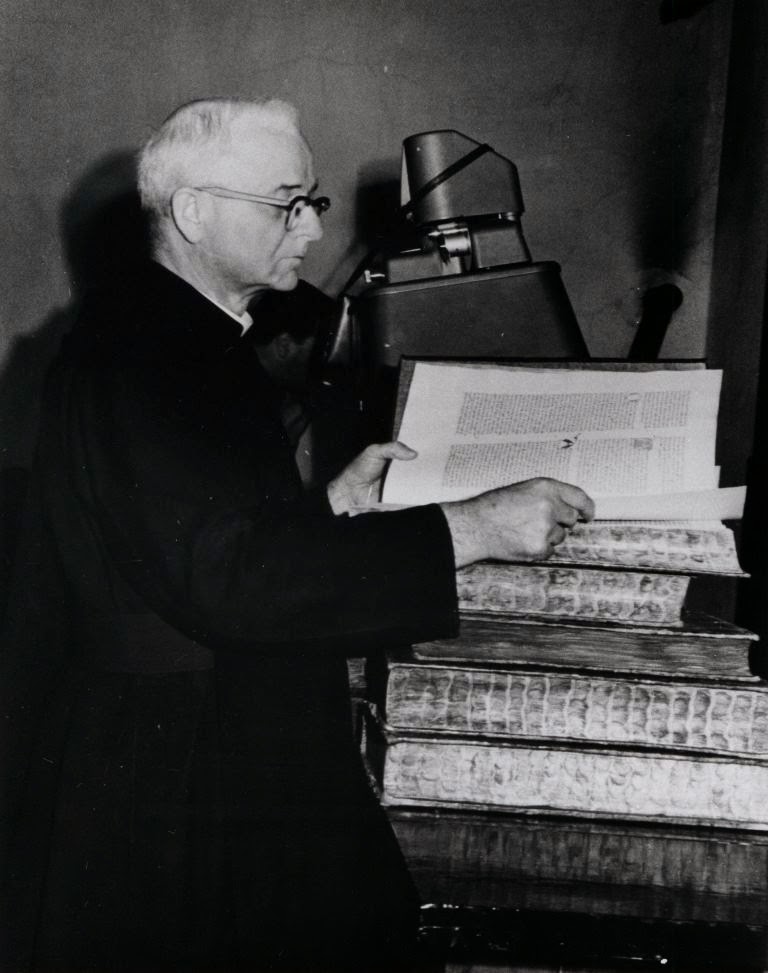 7. Camera 1, with the manuscript in place under the glass. The camera operator is P.S. from Vienna. 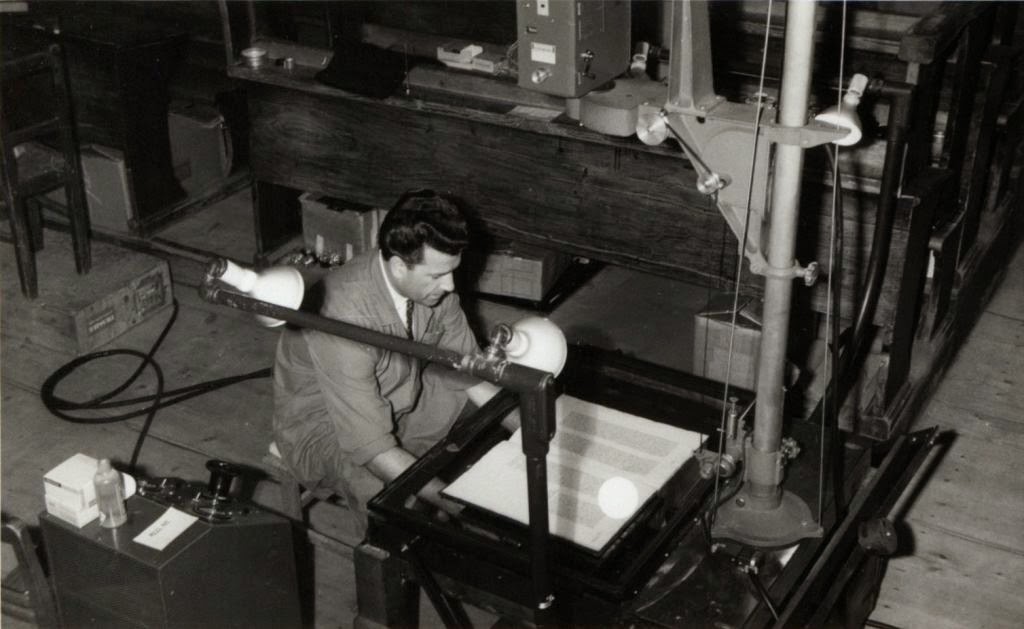 8. Discussing a problem at Camera 1. 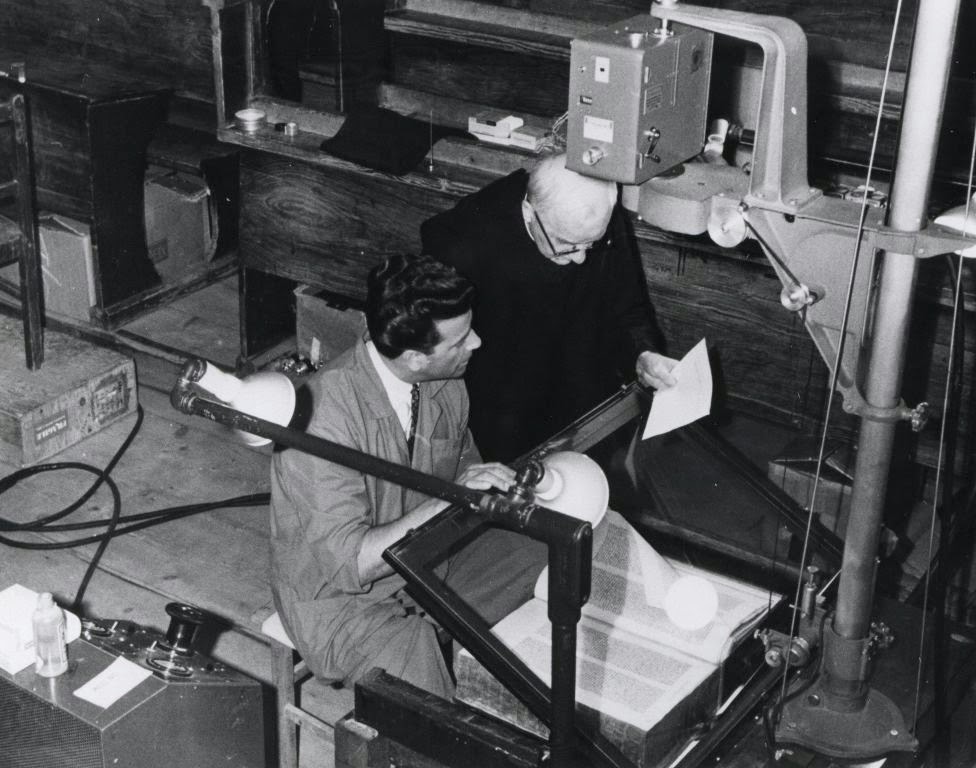 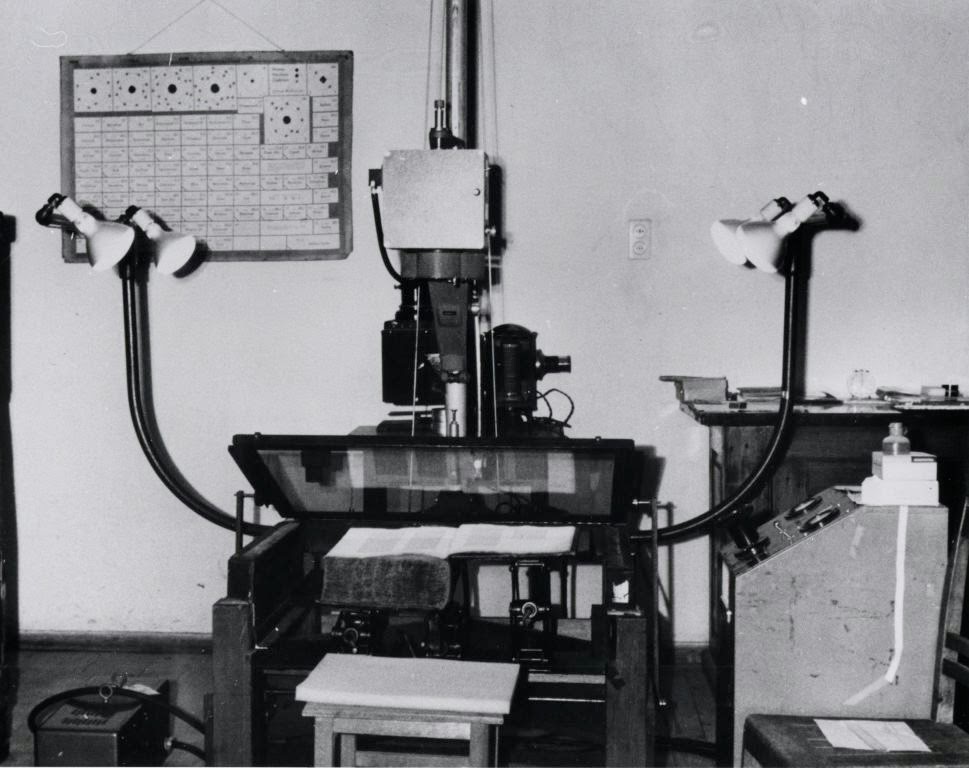 10. Camera 2, with the manuscript in place. The camera operator is H.R. from London. 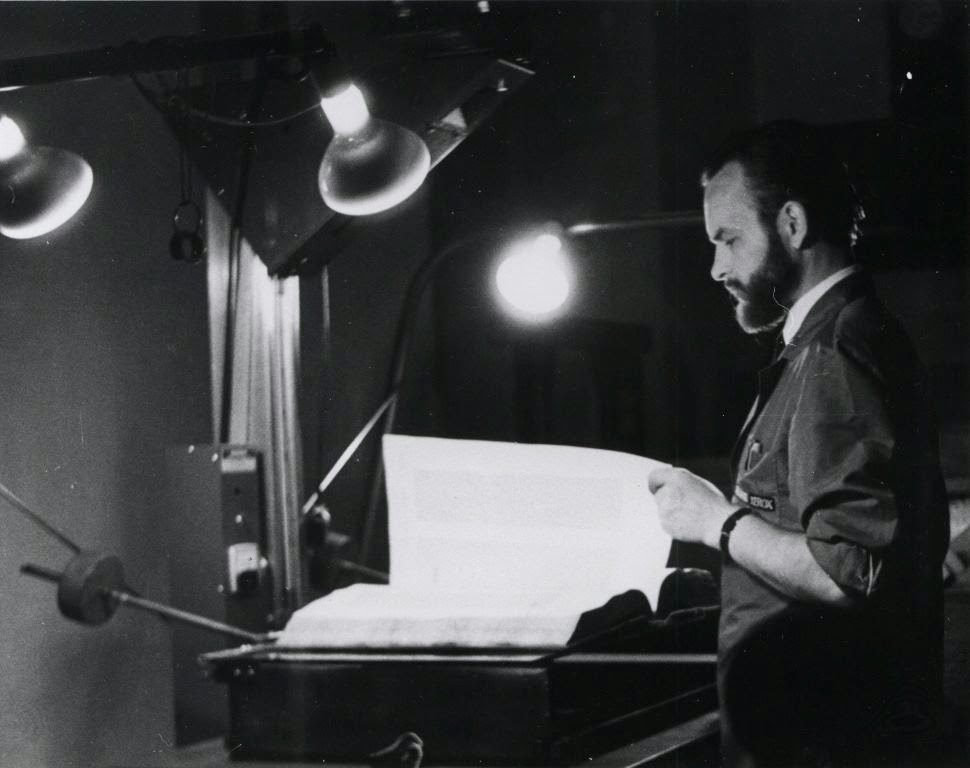 11. Camera 2, showing project board, which is photographed on the first frame. The project board reads: Monastic Manuscript Project, Number 838, Filmed by University Microfilms. 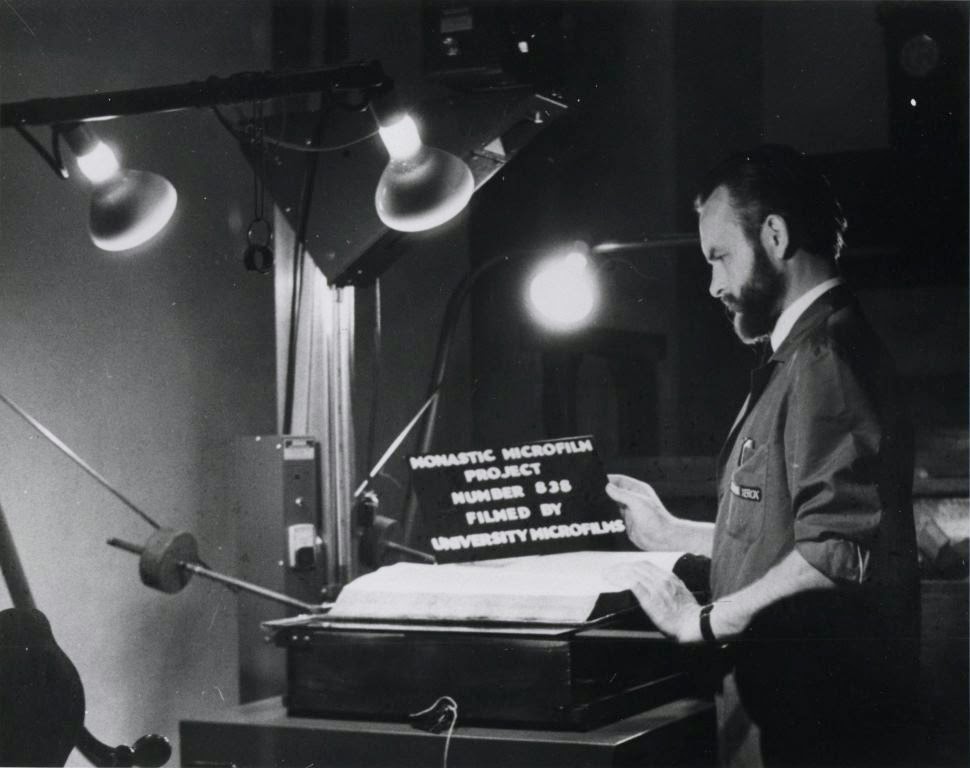 12. Packing films to be shipped to Vienna to be developed by Kodak Company. 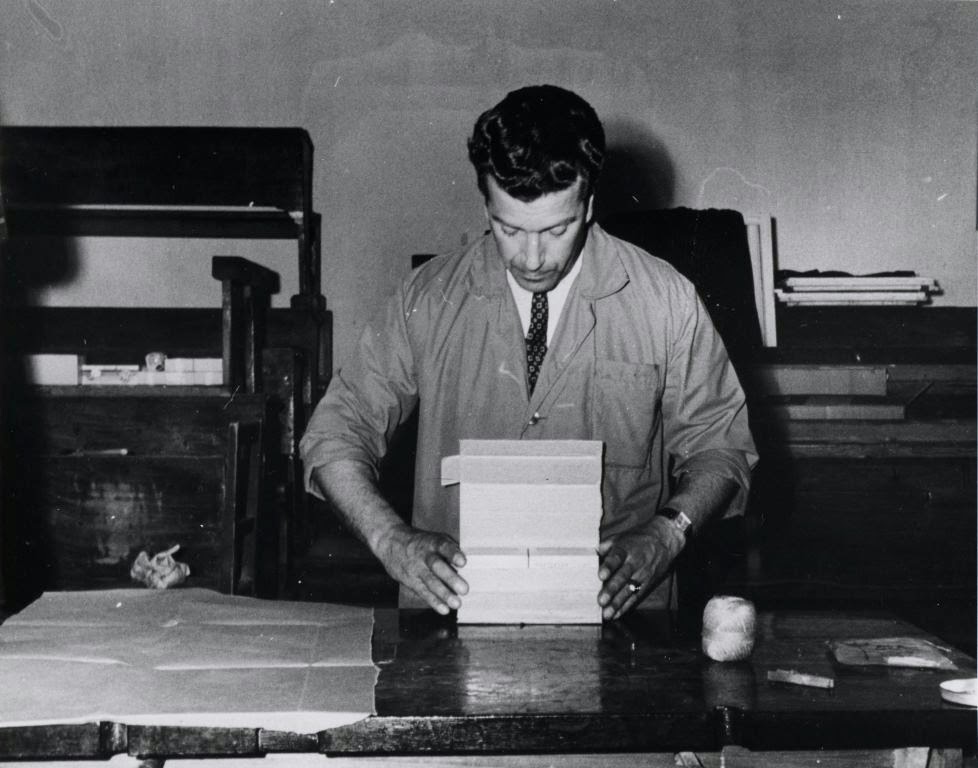 13. Inspecting the developed film on the Recordak Reader and checking against the original manuscript. 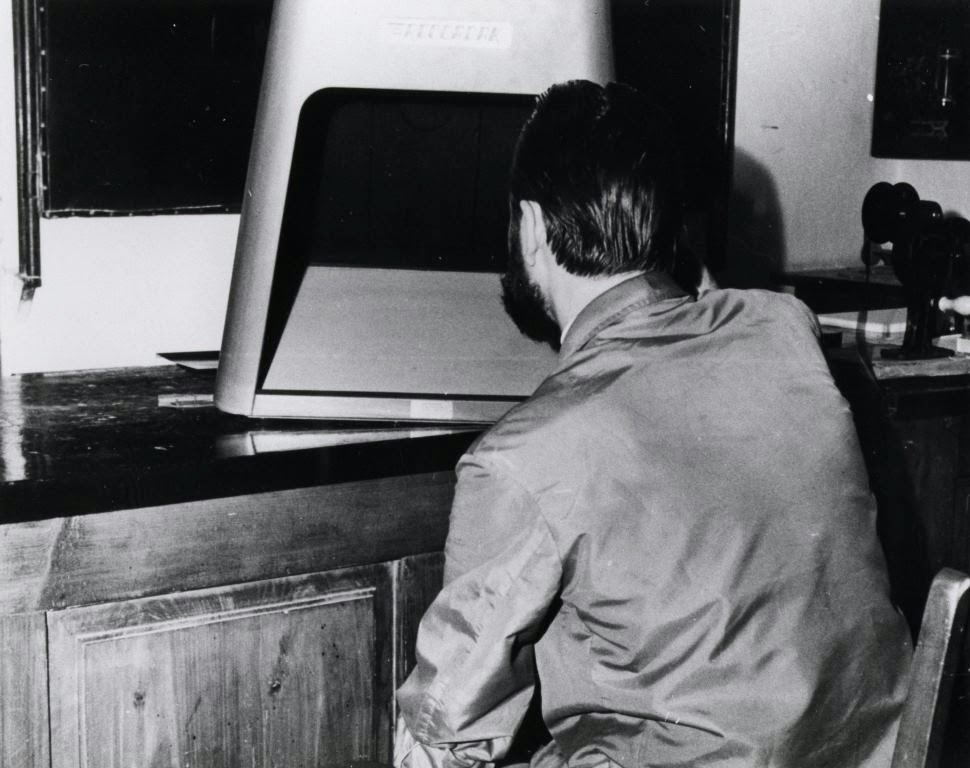 14. Splicing in a retake page. 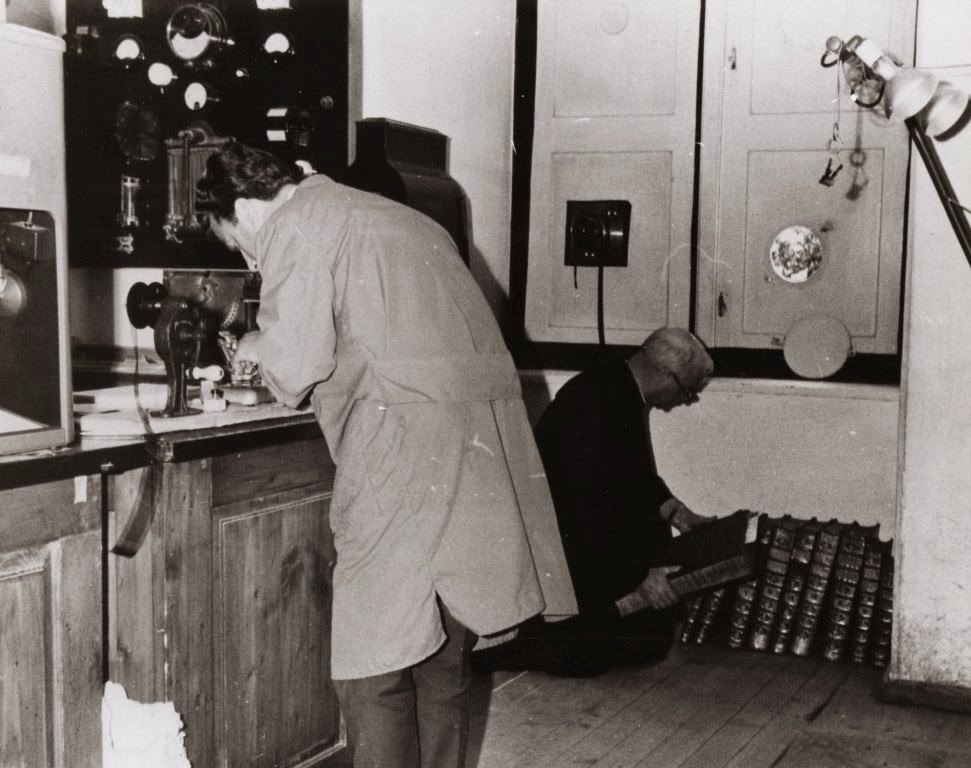 15. Packing films for shipment to the U.S. 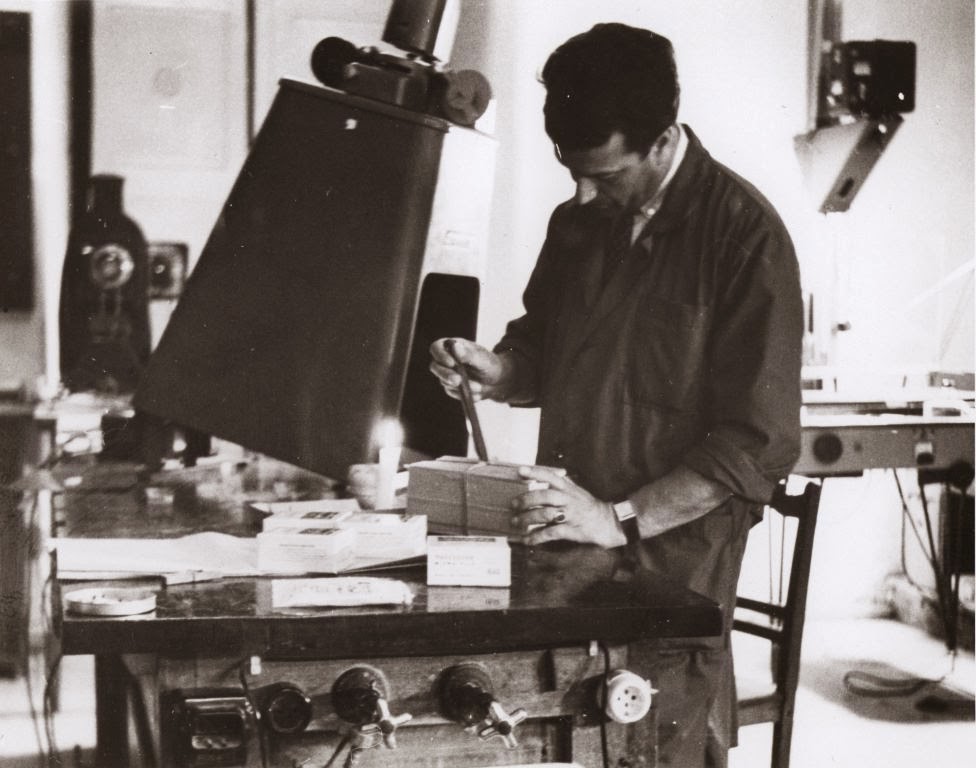 16. The crew with their Volkswagen Minibus, used for transporting the equipment from one monastery to another. (in photo: Father Oliver Kapsner, OSB; and his assistants: H.R. and P.S.) 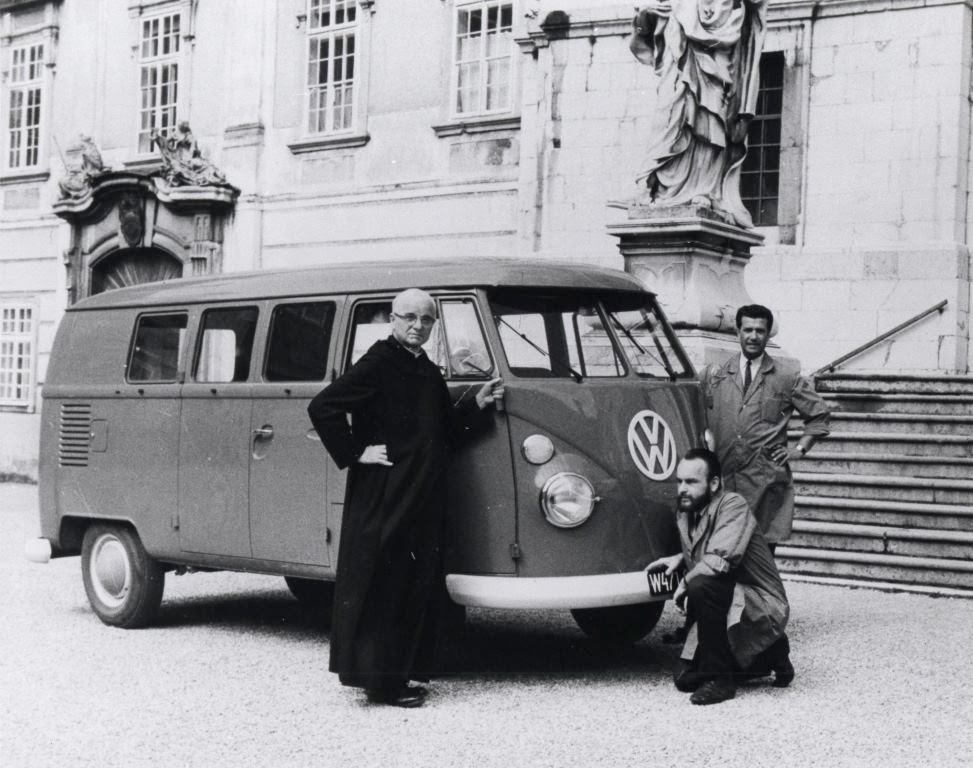 17. The crew with their Volkswagen Minibus (ready to head off to another library ...). 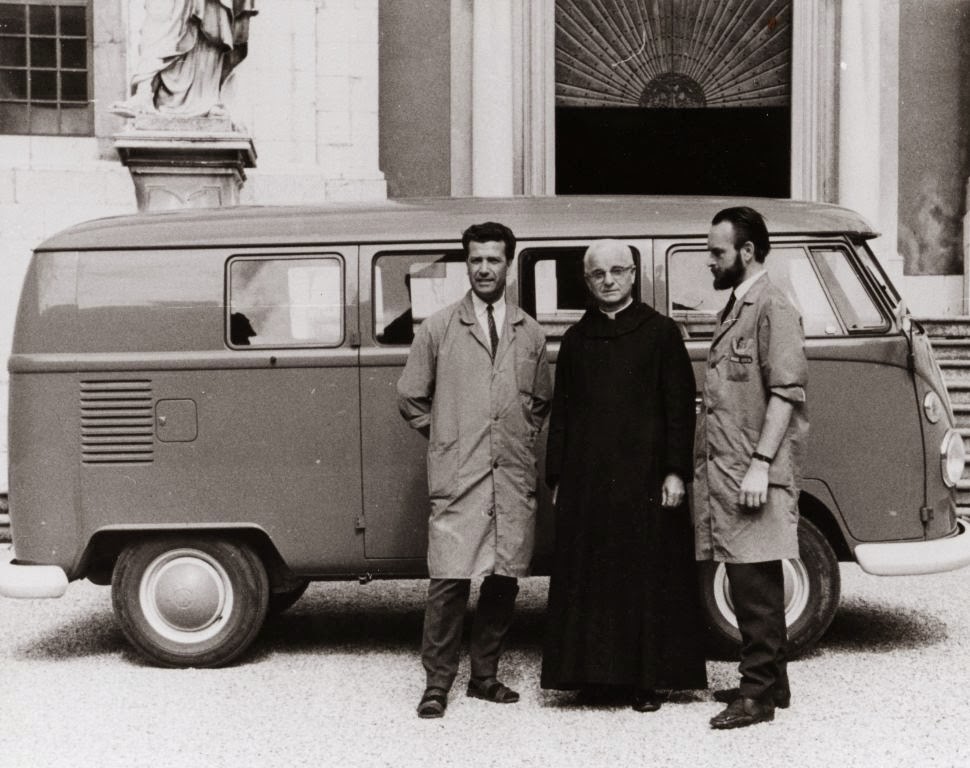 Posted by Matthew Heintzelman at 12:29 PM