(A Facsimile is) Worth a Thousand Words 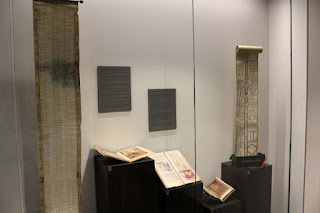 “Worth a Thousand Words” – Manuscript Studies and the Facsimile


This past week I was privileged to work with Tim Ternes to set up a small exhibit in the new HMML exhibition cases (one free-standing, three wall cases). This time, rather than putting out the "best" stuff or prettiest stuff, I thought it might be of interest to present various approaches to producing facsimiles or copies of manuscripts throughout the past few centuries. Here is brief preview of the exhibit. This exhibit will stay up until late August 2015.

Since 1965 the Hill Museum & Manuscript Library has pursued the preservation of handwritten culture through photographic means—first with microfilm and now digitally. In doing so, the Library has continued the long practice of preparing facsimiles of manuscripts and archival documents. The facsimile has long been a tool for scholars to study manuscripts that they did not have directly in front of them. However, earlier facsimiles were often expensive, scarce, or, at best, subject to artistic interpretation.

The term facsimile is a compound of the two Latin words facere, meaning “to make,” and simile, meaning “alike” or “similar’ (indeed, this word is also the source of the name for the once popular fax machine). Most commonly today, the term refers to specially prepared printed copies of manuscripts, often on finer paper and with precise photographic reproduction. Manuscripts are often selected for facsimiles due to their artistic merit or historical importance. Beautiful manuscripts (e.g., the Book of Kells) have been made into facsimiles more than once, plain manuscripts only very rarely. Even the Saint John’s Bible is available in more than one facsimile edition.

Earlier facsimiles were generally prepared with the common technology of the time—in the Middle Ages this might be as new manuscripts (one manuscript copied directly from another), or woodcuts in the 16th century, engravings in the 17th and 18th centuries, lithographs, chromolithographs and eventually photolithographs in the 19th and 20th centuries. Newer facsimile publishers will not only strive to reproduce the pictures accurately, but also the shape of the leaves, holes in the parchment, dirt in the gutters, the binding, and even the feel or texture of the parchment.

In this exhibit you will find samples of various techniques for producing facsimiles. At the same time, you will be reviewing some of the ways that manuscripts and archival documents have been studied through the past five centuries. Enjoy. 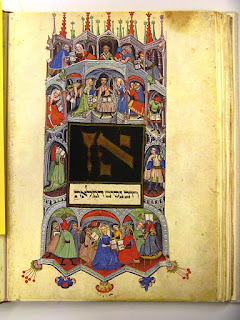 A haggadah (the “telling”) is a book of prayers that set forth the order of the Passover Seder. As such, it is used during a meal that involves several types of food, including a Paschal lamb. This facsimile attempts to reproduce the actuality of the manuscript (held at a library in Darmstadt, Germany) down to details like the shape of the pages, the dirt in the edges and the stains left by greasy fingers in the upper corners of the pages. Even the golden initials appear to be three-dimensional, as in actual gold leaf. Thus, this edition demonstrates a much higher quality of modern facsimile production. This folio displayed contains my favorite image of the book as a means to form community--everyone is holding a book (presumably a haggadah) and is engaged in creating and re-creating community through the telling of the Exodus story. Not a text for solitary study, the haggadah prompts discourse among those gathered at the seder meal. 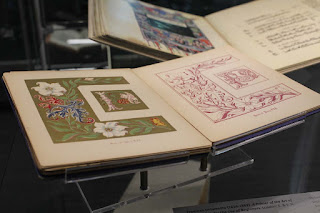 Delamotte’s Primer introduced students to methods for imitating medieval initials and decoration. This edition includes both colored (chromolithographed) leaves and uncolored leaves for the student’s practice. 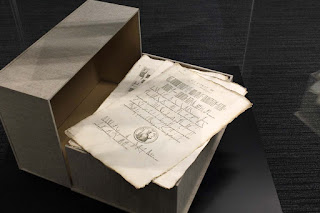 This copy of the 1732 history of the Abbey of Göttweig (Austria) was never bound into a book, making it possible to show several facsimile plates simultaneously. These engraved facsimiles reflect a resurgence in the study of handwritten materials in the late 17th and early 18th centuries—led by the Benedictines from the Maurist Confederation, which developed new methods for testing the veracity of medieval documents. Here we see reproductions of several such documents relating to the history of the Abbey of Göttweig. 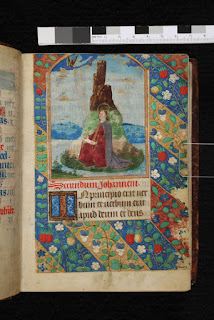 The earliest “facsimiles” of manuscripts were simply copies made from other manuscripts. Sometimes these copies would imitate not only the text of their models, but would also follow the layout or artistic presentation. Here we see Saint John the Evangelist on the island of Patmos, holding his writing tool and parchment. One might imagine medieval copyists working in a like manner to produce facsimiles of the books in front of them. Indeed, most medieval and ancient texts come to us in later copies. 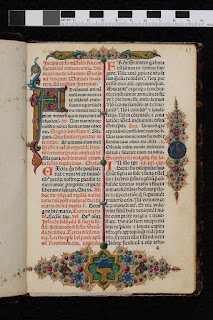 Early printed books often did not have large printed initials, but openings were left for an artist to add decorated, manuscript-like initials later. Sometimes these initials are illuminated, as here. The first leaf of this mass-book or missal demonstrates the urge to imitate manuscript art, even if not imitating a specific manuscript.

Along with the advent of printing in the 15th century, a renewed interest in writing developed. With the help of woodcut printing, 16th-century writing masters could produce multiple copies of their instruction manuals, demonstrating their approach to forming letters. These manuals used what we might call “pseudo-documents” that demonstrate what a manuscript would look like in a given script. Thus, the facsimile is more to imitate a script than a particular manuscript. 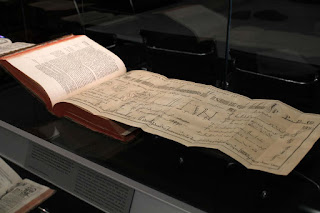 In the late 17th century, a group of Benedictine monks in Paris (the Maurists) started to research the history of their order and developed a new science—diplomatics (or the study of the authenticity of archival documents)—that set new standards for studying handwritten texts, both archival and manuscript. The Nouveau Traité provides numerous examples of archival documents in facsimiles printed from engraved metal plates. This allowed for greater detail than that from woodcut printing. Here we see a bull issued by Pope Honorius III (1150-1227).

Facsimiles were generally prepared with one of two purposes in mind: either teaching the use of various scripts, or for the interpretation of documents and manuscripts. In this case, the author has provided examples of two Spanish documents, dated 1484 and 1492, with transcriptions. Note the elaborate initial “I” in the opening line (“In dei nomine” or “in the name of God”). At the end of each sample is an alphabet showing the letter forms for the script in question. 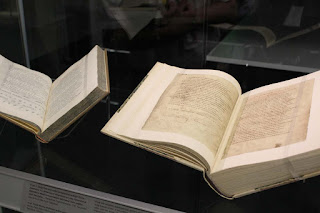 Along with woodcuts and engravings, printers also produced facsimiles using typeset letters. In this edition of Virgil’s works, the font, use of color, and the layout of the pages attempt to imitate closely the original manuscript in Florence. However, these two examples also show the marked difference between a photographic reproduction and an earlier (typeset) attempt at authenticity. The earlier facsimile does not distribute the text on the lines in quite the same scale as the original. However, the later facsimile is more difficult to read due to damage to the ink on the leaves.

In the early 19th century, printers began experimenting with a new form of producing images—the lithograph, or “stone printing.” This not only enabled a more realistic mode of representation, it also made multicolored printing easier. And, as the title asserts, the facsimiles are faithfully executed from the originals. 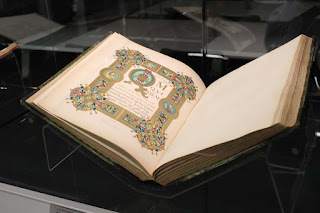 The lithographic techniques improved quickly, and richer coloration was soon possible. Chromolithography provided a livelier reproduction, as seen here in the 11th-century Gospels of King Canute, with text in both Latin and Old English. While the colors seem somewhat garish to our eyes today, the use of color was a marked improvement over engravings for manuscript studies. 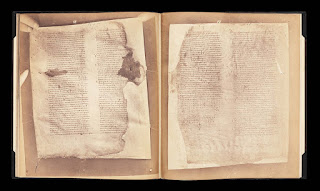 Photographic facsimiles of the remains of the Epistles of Clement of Rome, made from the unique copy preserved in the Codex Alexandrinus. London: Trustees of the British Museum, 1856.
HMML Rare Book Collection.

An early use of photography to produce a manuscript facsimile. In this case, the photos are actual photographic plates and not photolithographs. Photography opened up the possibility for more accurate representations of manuscripts. These salted paper prints (from glass negatives) were made by Roger Fenton, later famous as a war photographer. On plate 18 we find a touch of veracity not possible in woodcuts, engravings or lithographs: the fingers of Fenton’s assistant, holding down the corners of the manuscript. Before long, the printing (both in black-and-white and in color reproductions) of such facsimiles with photographic means (including photo-lithography) became common for manuscript studies.

Fragment of an illustrated, 12th-century Psalter. Here we see three scenes from the Gospel of Matthew: the flight to Egypt, King Herod ordering the slaughter of the innocents, and the horrific scenes of the slaughter itself.

Saint Liudger was a missionary to the northern Germany and Saxony and a contemporary of Emperor Charlemagne. This late 11th-century vita (or life) of the saint includes many representations of important moments in his life and death, including those shown here: a miraculous catch of fish and the intercession of an angel to save a person from hanging.

This late 8th-century psalter was prepared for Emperor Charlemagne and his wife Hildegard by a scribe named Dagulf. The size and format of the book point to it being for private devotion and not for public or liturgical use.

This 14th-century scroll reflects the desire of the author, Peter of Poitiers (ca. 1130-1215), to provide students with an easy and quick overview of the family tree of Jesus Christ as derived from the Old Testament and the Gospel of Matthew. Note the use of color as a mnemonic device: women’s names are in green circles and men’s names in red circles.

The study of manuscripts through facsimiles continues today, especially in the use of digital reproductions. Today, however, we try to reproduce all manuscripts and documents, regardless of their beauty or importance. After all, we cannot know what future scholars will find worth studying.

Posted by Matthew Heintzelman at 1:40 PM